Last weekend was our annual sisters' weekend, that actually lasts longer than the weekend. As usual, we had a blast catching up and just plain enjoying each other. This is the first year we have not gone to Burr Oak for the event.

Instead, everyone made the trek to my house this year and I was thrilled. I've always taken my sewing machine and over the years, everyone started doing the same. Here you can see five of the seven work stations that we set up. 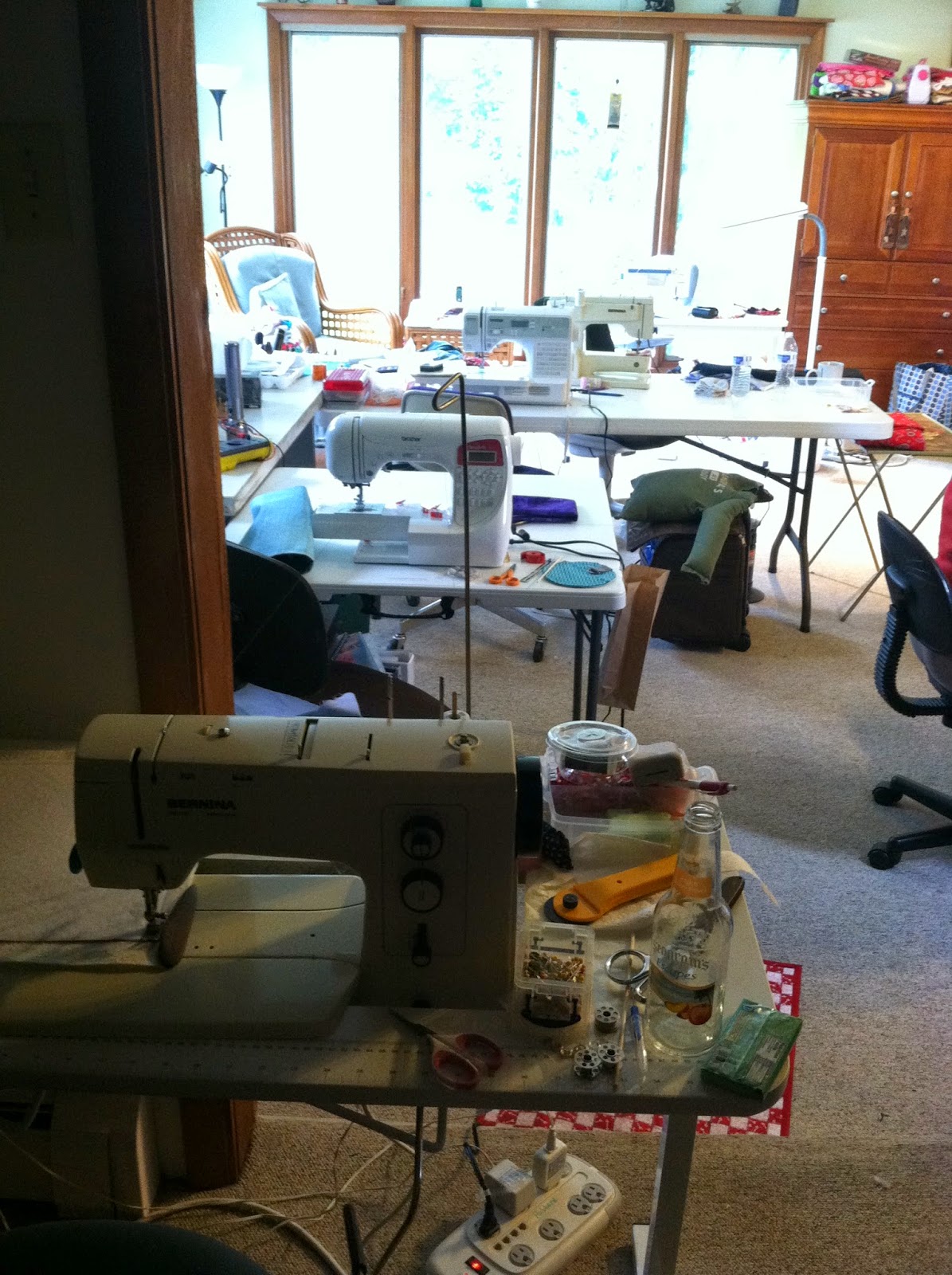 Pat was teaching us all how to make umbrellas and we had a blast. We made a total of 13 full size umbrellas in one day and two children's umbrellas were made the next day. These are so much fun. 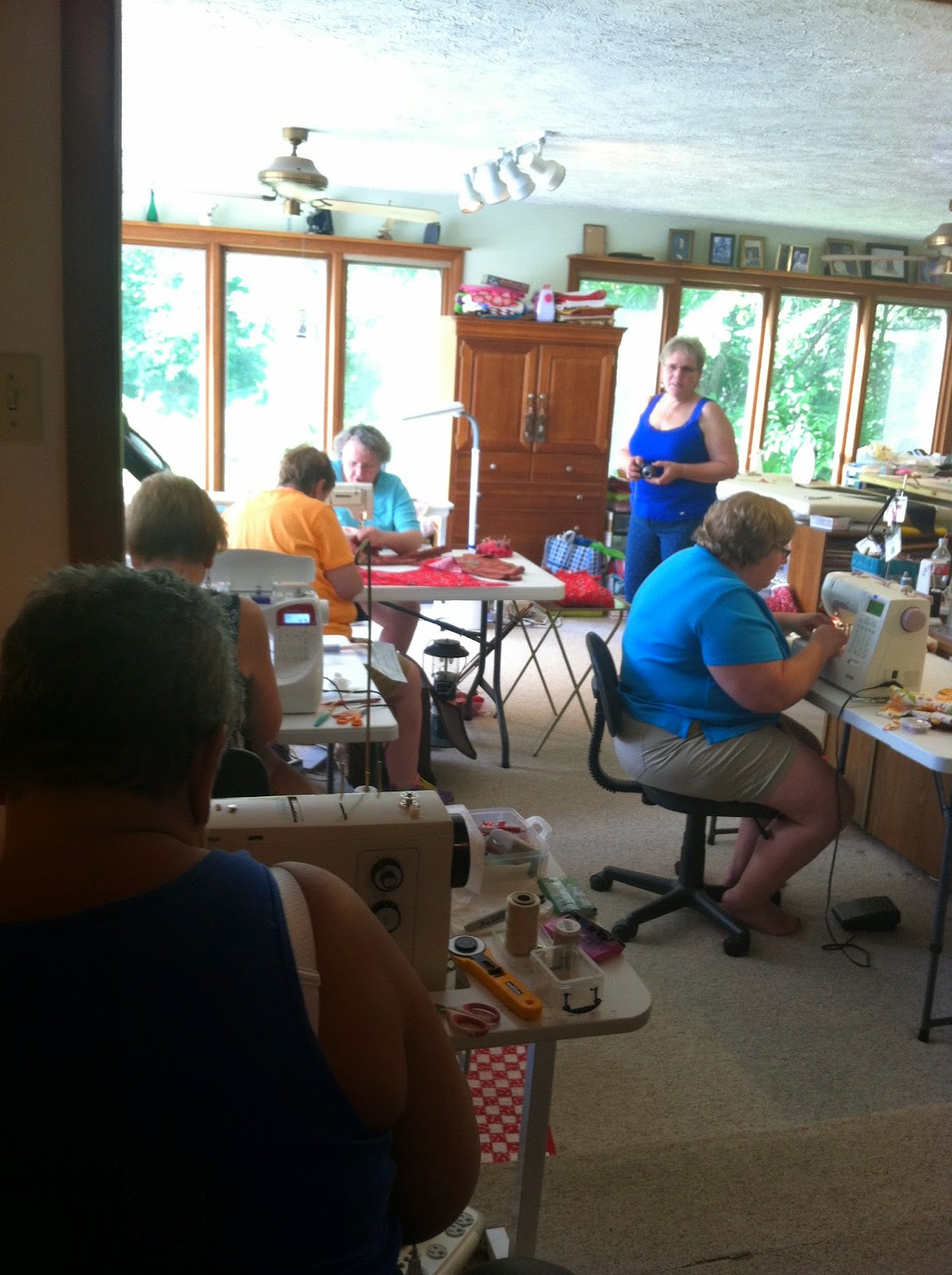 Thanks Pat! Now I see fabric and think, "Oh, that would make a great umbrella." 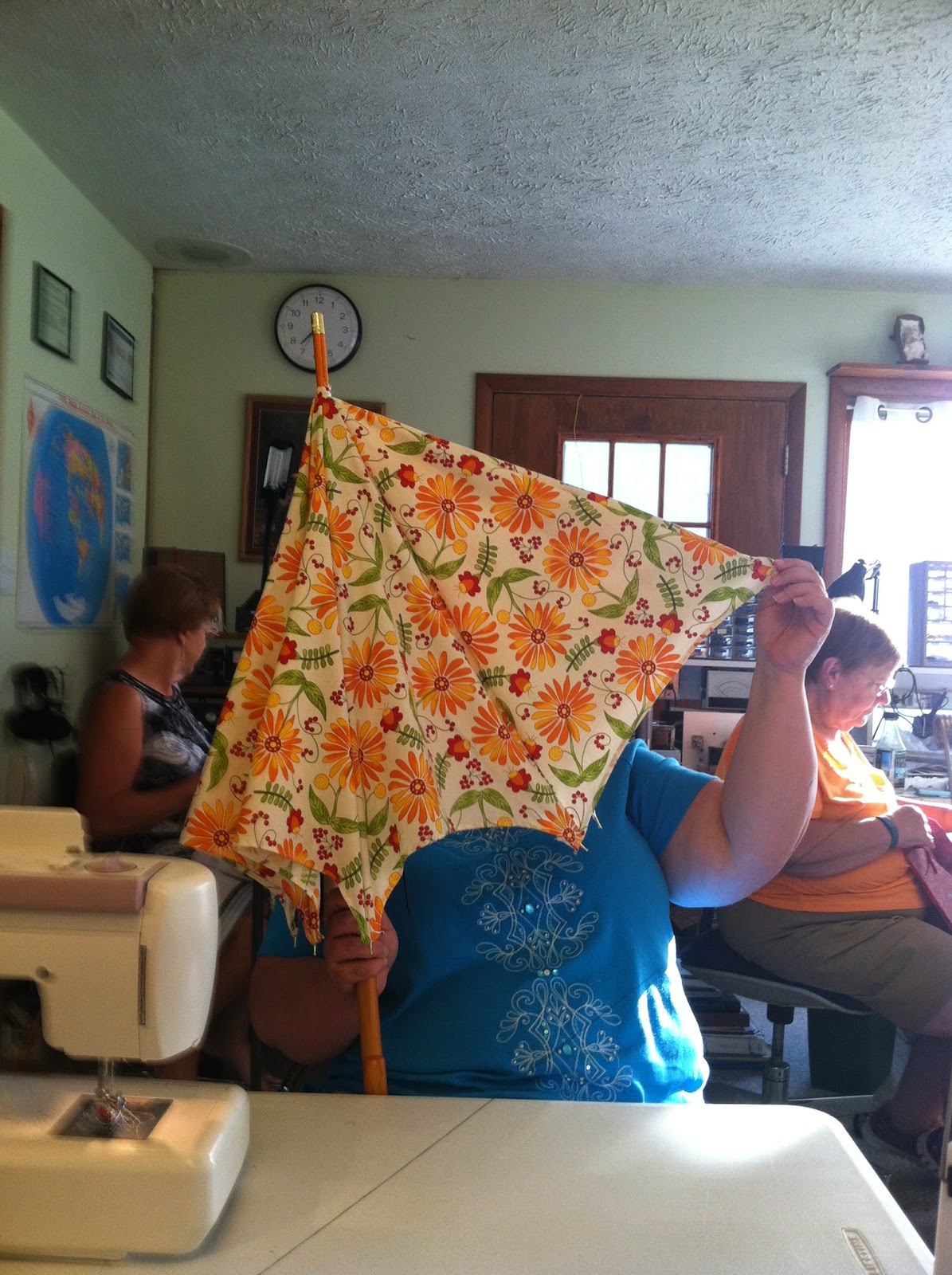 I worked on a couple of projects that needed finished up for classes I'm offering. I finished my table runners but forgot to take pictures before I dropped them off at the shop. :-(

I finished my Jewel Box wall hanging and LOVE how it turned out! I'll be teaching this at M & E Quilt Shoppe in Sandusky. If you happen to stop in or send them a message, tell them Agnes sent you. That's my "shop" name. Don't you think it fits in with Mabel and Ethel better than Joanne? 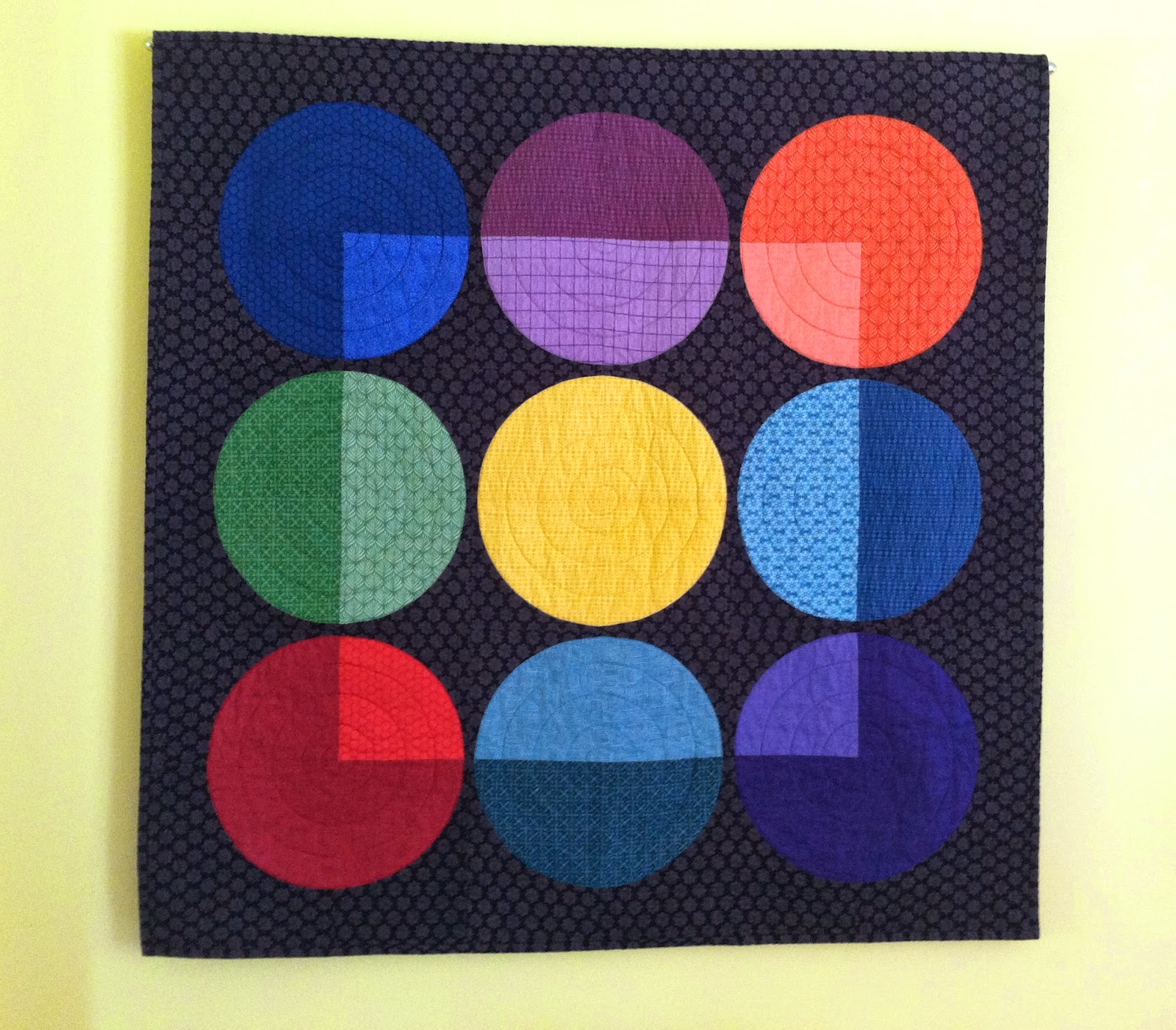 Ann was busy working on her Fabric Boxes. She's making a HUGE number of them and I can't wait to see them all done. She is her own little sweatshop!

After I finished up the projects that needed done, I pulled out my Prairie Star and began working on that. I'll get this done. It just seems like every time I pull this out to work on, something with a deadline pops up. I WILL get this done! 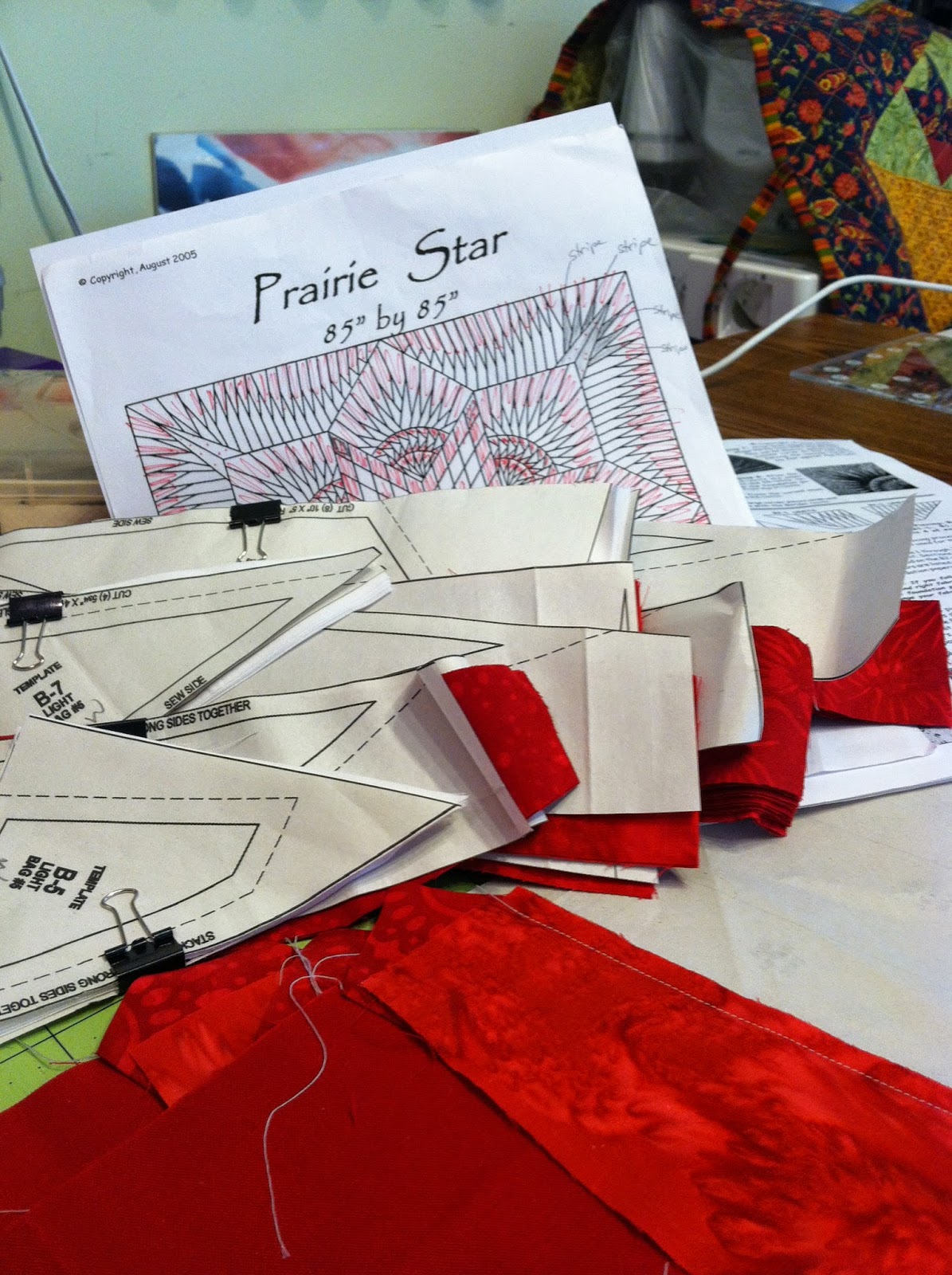 As I mentioned recently, Nikki and family have moved back up near us and I am thrilled! To help get her acquainted with some kids her age, Quinn attended a Vacation Bible Study camp this past week. She had a wonderful time and met some kids that will be in her class come Fall. Last night was the End of Camp Celebration and Jack and I joined them for a Family Fun Night Carnival.

It was a lot of fun and they had a bunch of stuff for the kids to do. All three kids went through an obstacle course, although Ronan only made it half way through because he couldn't figure out how to climb the one set of inflated stairs. Of course I didn't get the camera out until after they had done that, but I did get some pictures of Quinn and Nikki rock climbing.

Look at Quinn! She was nervous at first, but did a great job. She got a little over half way up before she had to stop because she couldn't figure out how to reach the next stepping stones. She was a bit too short to grab with her hands and still have her feet touching a lower rock. She did a great job and said that it was hard to do and her legs started shaking. 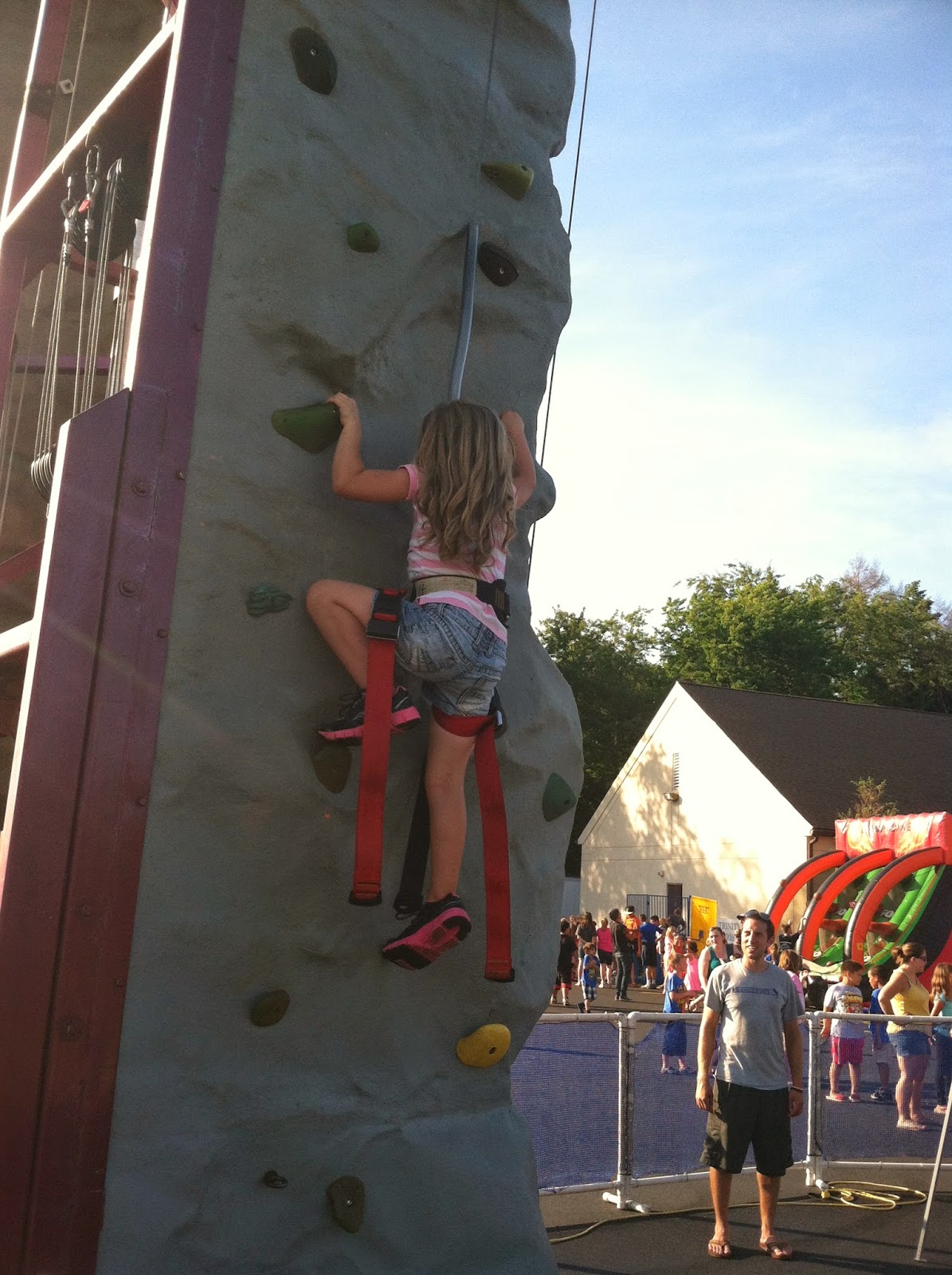 It's a bit difficult to see here, but Nikki is on the right and Quinn is on the left. I  love how the sun is shining across the picture through Nikki and on to Quinn! 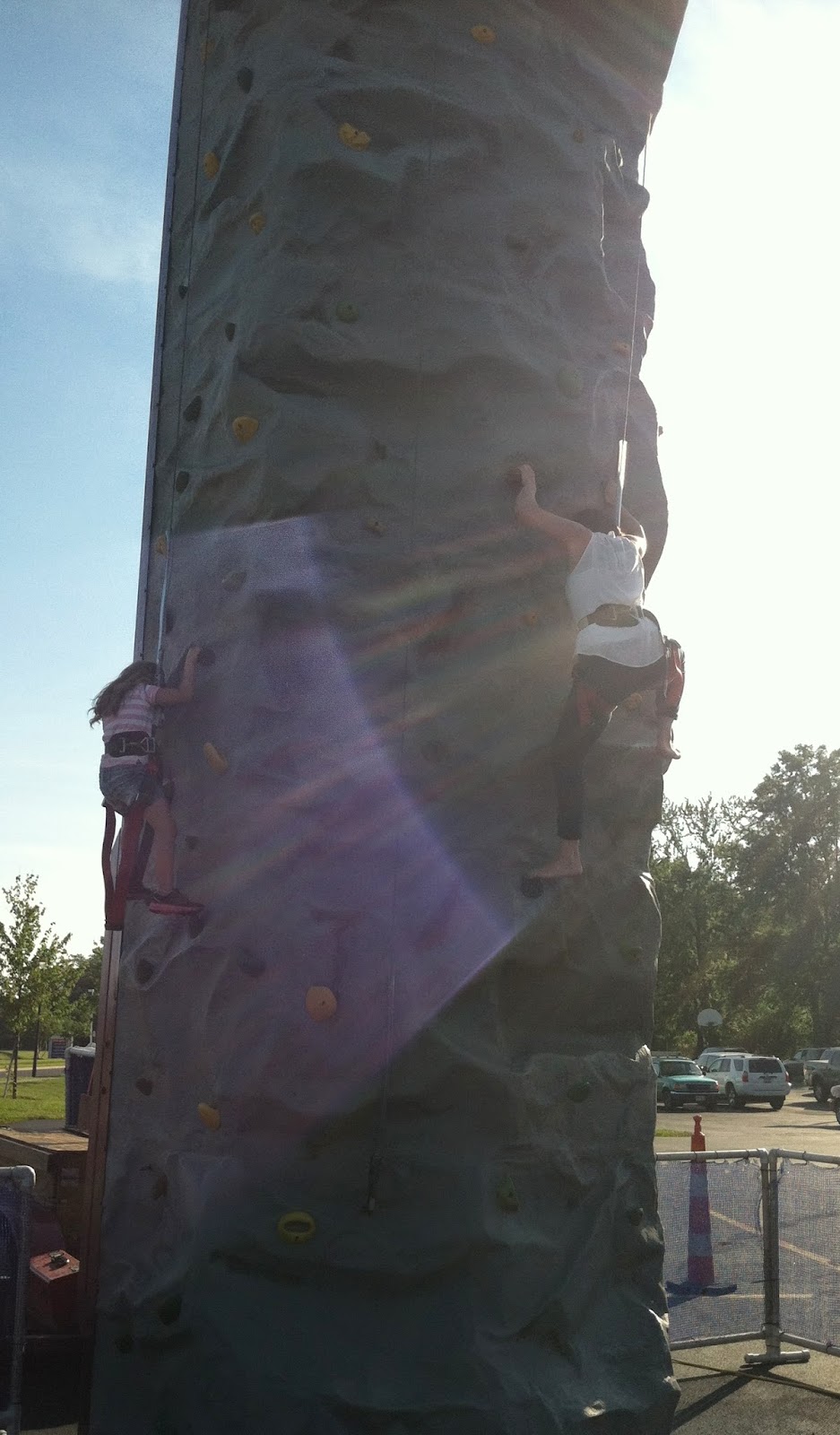 After rock climbing, all three kids waited patiently to go into the bouncey castle. Can you tell the sun was kind of bright? They had a great time in there! 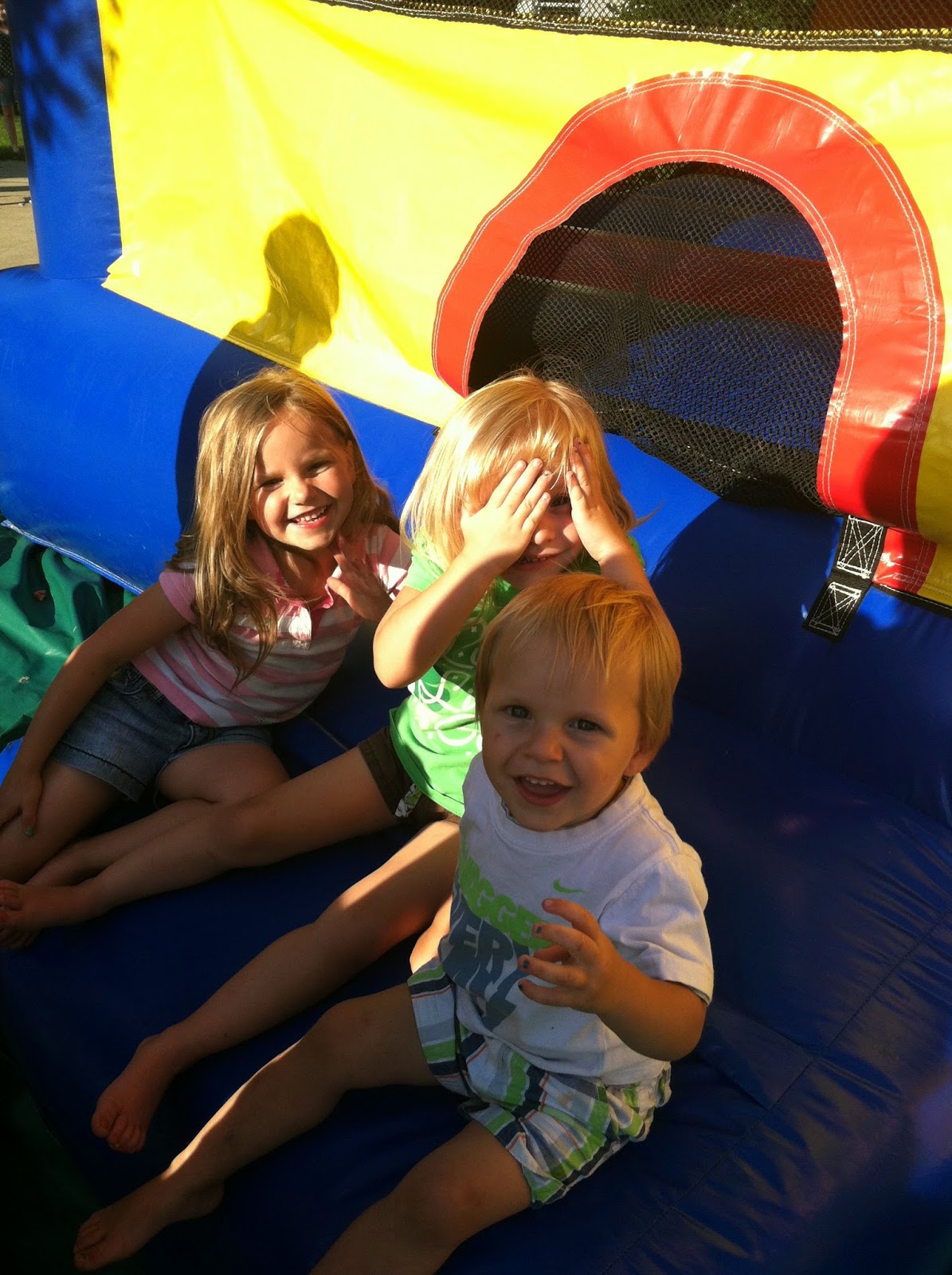 And finally, after the fun times out side at the Carnival, everyone went to the sanctuary for a brief program. When the minister called the kids up to sing, Quinn jumped up and ran on stage. I had hoped that she would stay close to the front so we could see her, but nope. She went toward the back and finally ended up just about in the middle of the pack. I know it's difficult to see, but there she is, right under the big red and yellow arrow. Even though she was in the middle of crowd, we did have a clear shot at seeing her. 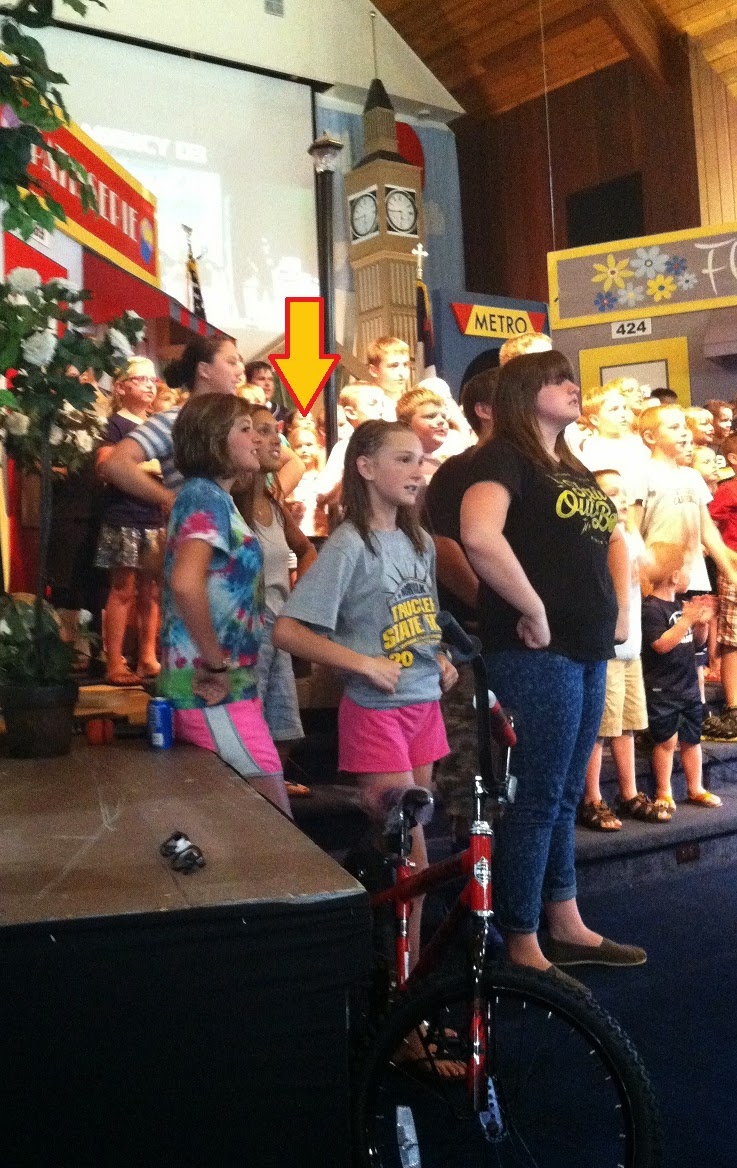 She wanted me to take a picture of her doing the hand signs and choreography for the song she liked the most. Of course grandma obliged.  :-) 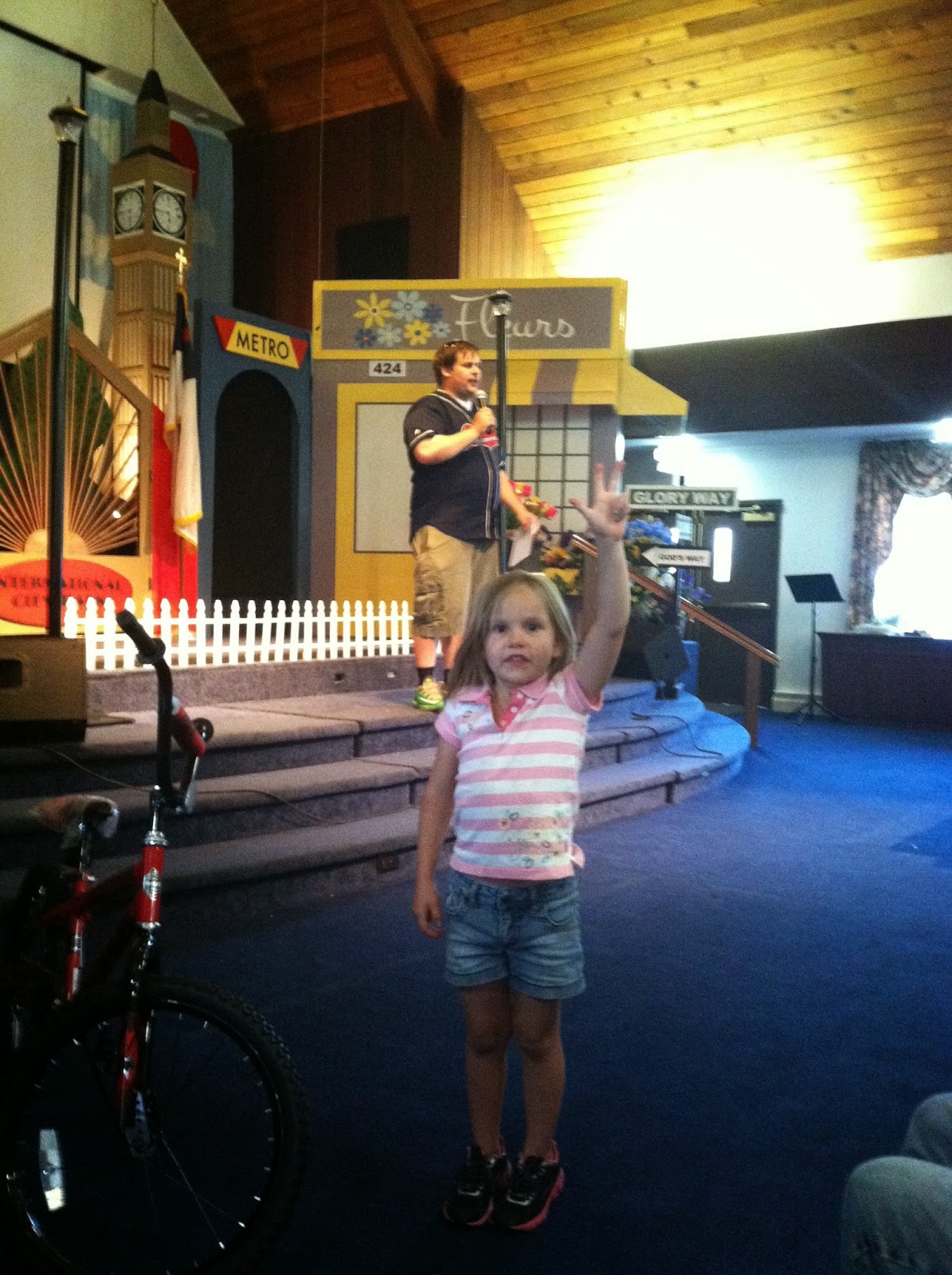 I'm going to be doing a bit of sewing this afternoon and them we're heading to Nikki's house for a small cookout.