The Jelly Jive binding was finished on New Year's Day but I'm counting that as a 2012 finish. It really only needed one side hand stitched down and I don't think it would be right to call it a UFO finish for 2013. So that means my 2012 new quilts done, done and done total was 22 and I'm really happy with that! 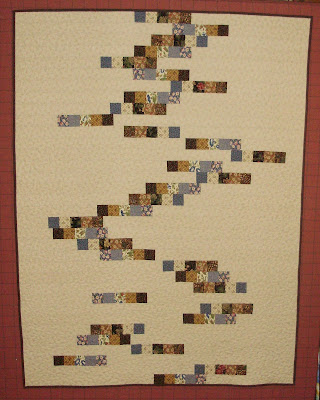 When I look at the thumbnail picture of this quilt, it think it looks like some sort of medical scan picture but when I look at in in person, it reminds me of Morse code. Since Jack and I are both ham radio operators, I thought it would be fun to make one of these with a message to him, so I sat down and sketched out my message in dots and dashes and started pulling fabric for it. Ok, I know I just signed up for Cut to Pieces Project UFO 2.0, but I figure that I can start (and hopefully finish) some new quilts as long as I'm working on UFOs too.
Anyway, when I put the finished quilt on the wall to photograph, Jack said it looked like code and wouldn't it be fun to make a quilt that says something like "Samuel Morse lives on!" I couldn't believe it! Really, he was thinking along the same lines as me only my message was going to be a bit more personal.  :-) We laughed and decided that I will make that quilt and it will probably be sooner than later. You know what they say about great minds, right?
Well, since I'm going to be starting a new quilt soon (hehehe) I decided I better go to the Tub of Shame and pull out something to finish. I picked up a paper piecing project that was started a very long time ago called Radiant Rainbows. This was a class I took when I was first quilting (somewhere around 2000) and I knew NOTHING about paper piecing. Of course from the look of things, I knew nothing about picking good quality fabrics or thread either. :-)
After evaluating the project and remembering why I put it aside, I decided that since all the blocks were pieced and six of them were already sewn into rows I might as well just sew the rest of them together and call it done.
On a side note here. I remember this class well and they aren't really fond memories. I really did not enjoy the class or the instructor at all. She had some friends in the class and spent a huge amount of time talking to them about their husbands and the neighbor that they all knew was having an affair. Since I was new to not only paper piecing, but pretty much quilting in general, I had questions.  Unfortunately I was the only person in the class of six who had never done paper piecing before, but in my defense, the class description said you didn't need to have previous experience. The instructor did a quick demo of paper piecing and handed out a hand-written "help paper" for us to reference if we needed help. Let me just quote a few things from the "help paper." (My responses are in blue and italicized.)
1. Because you will be sewing on the lines and don't want the paper to fall apart, use heavier weight paper for your copies. (I have made copies for the lap quilt - 12 patterns.) If you want a larger quilt, you will have to make your own copies. ***She sure did use heavier paper. I think it is one step below card stock! I guess I'm used to Judy Niemeyer's pattern which use very thin paper.)***
2. To make removing the paper easier, reduce your stitch length - probably to a 1 or 1.5 for most machines. ***Let me tell you that if you make a mistake using such a small stitch length (which I did of course), it is almost impossible to remove those stitch without tearing your fabric. Granted, I didn't have the best quality fabric, but I think tears would happen on even the best quality fabric.***
3. When you have finished a block (all four components sewn together to make one circle), the block will be oversized. Do not trim the blocks yet. Sew a basting stitch about 1/2 inch from the outside solid sewing line. The blocks will be trimmed later, after sewing them together. ***Really, trimming these after the fact is a real pain! Of course I know better now and trimmed them all down before going any further.
4. Because you are combining lots of fabric at the center intersections, do not be alarmed if there is a bump. This is normal and should be easy to press out later. ***I don't have a small bump. I have a mountain! I'm not sure any amount of pressing is going to take care of this. Perhaps a rubber mallet would work. That should reduce some of the bulk as well as any frustrations I might have. :-)  I showed this to a friend last night and she suggested adding buttons or some other type of embellishment at the intersections. To do that would make this a wall hanging and I'm ok with that***
Now don't get me wrong, there were some good things listed as well, but the items above caused me lots of problems. I also recognize now, that since we never had to buy a pattern, there was probably one out there that the instructor just copied - illegally. That makes me sad.
Anyway, after having heavy sighs and eye rolls accompany very turt responses to my questions, I pretty much quit asking them. I remember coming home and telling Jack that I was so disappointed and that if I ever taught classes, I would model myself exactly opposite of this instructor! Of course Jack and I had only been married about a year at that time and neither one of us knew the role that quilting would have in our lives.
I've sewn the rest of the rows together and the top is done. I have to find some backing fabric and get this sucker quilted and bound. This is fairly small and with the "mountains" in the center of each block, I think I'll quilt this on my home machine. Should be interesting... 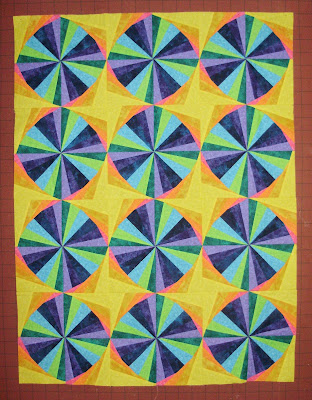 I've been busy and have other things to show, but I'll post them later because I have some phone calls to make.
Posted by Joanne at 2:31 PM