This was a good week and I have good numbers to report! There was no fabric added this week but there was a lot out because of finishing up projects, using LOTS of 5" squares and making LOTS of pillowcases. Actually, there was some fabric added because I received a kit to make a charity quilt but I haven't even opened the package yet so I don't know what's there. I knew that if I opened it I would want to start the project and I had too much else to do. I plan on opening the package tonight or tomorrow morning and will report it next week. Wouldn't it be great if I can report it IN and OUT in the same week?!

Yesterday, a number of women from a local Curves made 36 pillowcases for area charities. I've been doing this on my own for a couple of years and last year not only did my quilt guild begin making them, so did some of the women at Curves. As part of our "Stronger Together" theme, I organized the Sweet Dreams Pillowcase Project for the group and we made 36 pillowcases in about 3 hours. (Not bad for a group that included some people who had never sewn before!) I'll be adding this number to American Patchwork & Quilting 1 Million Pillowcase Challenge that I'm sure many of you know about. If you don't, go to http://www.allpeoplequilt.com/millionpillowcases/index.html to check it out. Below is a picture of our pillowcases ready to be thrown in the washer so they can be taken to the receiving charities later this week. 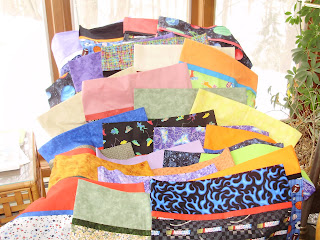 Why not go to Judy L.'s Patchwork Times blog and see how other quilters are using up their stash?
Posted by Joanne at 2:06 PM

Love, love, love making pillowcases. Good for you for organizing a group and leading the non-sewers!