I've been a bad blogger lately! I really have no excuse, other than lack of desire to post either because I don't really feel like I have anything to post or because I was busy and didn't have the time to post. I guess when I say that I feel like I don't have anything to post, that's not really true. I have lots of stuff to post, but not much in the way of quilting and when I make a series of non-quilt related posts, I hear about it.

There are a few quilt-related things going on here, but just not a lot to show. I was busy getting samples ready for the next series of classes and I completely finished my white Zen Garden. (Sorry for the partial quilt picture. I had some issues with getting pictures taken and this was as good as it was going to get.) 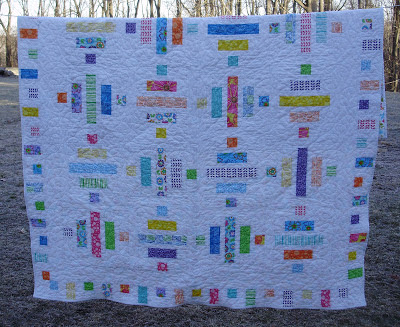 The black Zen Garden still needs quilted, but the top is pieced. I just couldn't get the quilting done before the samples needed up for display.  :-( 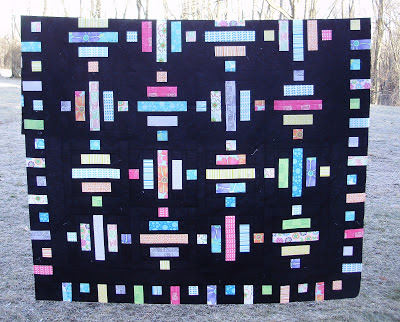 ﻿
﻿
I got a few other little odds and ends things done, but nothing of which I took a photo. (See what I mean by bad blogger?)
During my blogging absence, Quinn and Sadie spent a week with us and we had a blast. Of course Jack and I were quite tired by the end of the week, but it was still fun. I know the girls had fun, but I know they missed Mom, Dad and Ronan also. We all met up at a restaurant in Columbus and it was really fun to watch the girls discover when their parents arrived. Quinn saw the car first and was all excited to tell Sadie that she saw a car that was the same color as the one Dad drives. She then got all excited when she saw a person wearing a coat like Mom's! When Nikki turned around and they saw her carrying Ronan through the parking lot, both girls started giggling and clapping their hands. Good thing we were not inside with other patrons, although I think most of them would have thought it was fun to see. By the time Nikki, Zach and Ronan got into the building Quinn and Sadie were so excited that they couldn't contain themselves anymore. The hugs and kisses were just so much fun to watch!
While they were with us, the girls did a lot of playing together, but they also did their own things. Sadie spent a lot of time reading, and she especially liked reading in the room with the fireplace. She sure does look comfortable and interested, doesn't she! 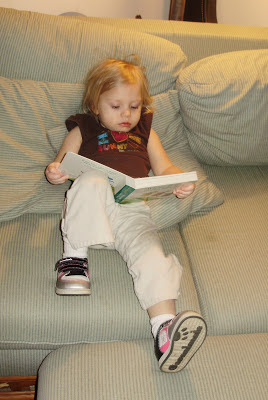 Quinn liked being in the same room, but her activity of choice was doing puzzles. I think this particular puzzle was put together at least four times while she was here. 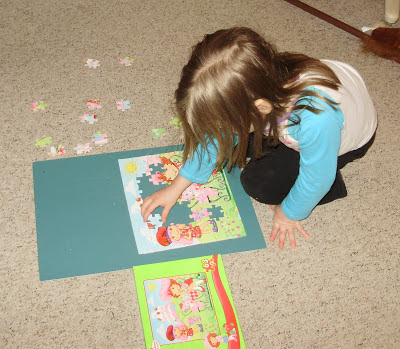 And of course there was lots of coloring! I found this memory the other day and just started laughing out loud. 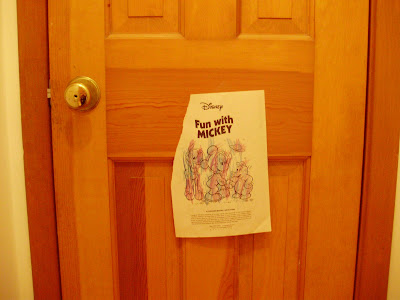 The girls (Quinn) decided that it would be a good idea to hang up various colored pictures around the house to be used kind of like signs for visitors. This is one that Sadie colored and it was hung on the door to the downstairs bathroom.
Here's how it was to work. If someone came to the house for the first time and they had to use the bathroom, we would just tell them to find the colored picture of Mickey Mouse. According to Quinn, having to look for the picture would be fun and therefore, going to the bathroom would be fun. :-)
I think I'll leave the picture up a little longer......
Check out what other quilters are working on by going to Show and Tell Tuesday at
i have to say...﻿
Posted by Joanne at 2:03 AM 3 comments: