These five quilts are ready to have the hand stitching done. I know it only looks like three, but there are two fairly small quilts - 52" x 64" that are folded up and tucked between two larger quilts - the scrappy Bundle Buster on the bottom and the Sunset Strip with the blue binding. 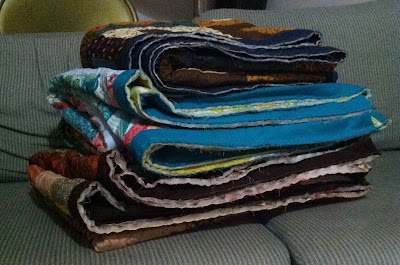 I haven't decided, but I might take one with me this weekend to work on Saturday night. Annie and I have two workshops (umbrellas on Saturday and Mondo Bag on Sunday) and since I like to bind, that might be just what I need to relax after a long day.

I know that I won't bind Friday night. (We're going up a day early since we have to set up at 8:30 Saturday morning and I worry about running into delays since we're about 2 hours away.) We'll spend Friday night double checking (actually triple checking!) everything and try to get to sleep early. I don't know if that will work. We tried it last year and spent the night talking, laughing, and saying, "We really need to go to sleep!" 😄

I'll try to get pictures and post them Sunday evening.

Have a great weekend!
Posted by Joanne at 1:02 AM No comments:

Email ThisBlogThis!Share to TwitterShare to FacebookShare to Pinterest
Labels: Binding

I've been very busy, but I do have something new on the design wall.

I've sewn what seems like miles of binding and I'm getting ready to add that to five quilts. I also have some quilting to do on a number of tops, so I'll be a busy girl for quite a while. Plus, Annie and I have a workshop this coming weekend (Umbrellas and Mondo Bag) and although we spent quite a bit of time prepping for that this past weekend, I have a few more things to do.

As a reward to myself for getting all the binding ready and most of the stuff for the workshops, I decided to make something fun- just because.  😃

I've had this funky giraffe fabric for a long time and had even had some coordinating fabrics with it. I knew what pattern I wanted to use, so I figured this would be an quick project that would be perfect. 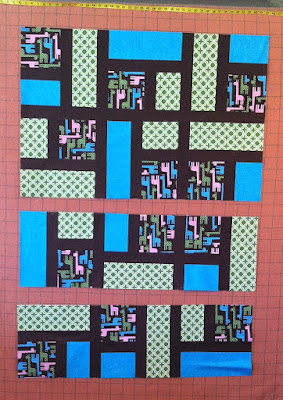 This is Menagerie, a free quilt pattern from Shannon Fabrics. I'm still playing around with the block layout; and I have sashing and borders to add, but I like it so far. I wasn't too sure about the four blocks that come together on the right side, but it's growing on my.

If you decide to use this pattern, be sure to read all of the information before you begin. After I had cut everything, I realized that the sample was made with Minkee/Cuddle fabric. Because of that, the seam allowance is 1/2", not 1/4". That's not a big deal, except that I cut everything before I realized it. Again, not a big deal because I just cut everything down to make the adjustment, but I really should have read the entire pattern before starting. I usually do, but I guess I was too excited this time.

I've got a couple of projects going right now. (imagine that!) Last week, I showed a quick picture of the batik quilt on which I'm working and that is ready to have the rows sewn together. 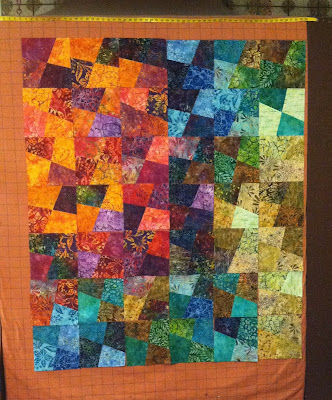 I played with the idea of adding a small black sashing between the blocks, but I didn't like how it looked. I will make this again, and when I do, I will add a small piece of black fabric between the block units. I sketched it out and am positive that I will like that much better. This isn't bad, but if I add the small black fabric, it will look like stained glass windows.

I have this quilt top all sewn together. (The picture is before it was pieced.) This is made from one layer cake and it's super easy to make. The baking is also pieced for this quilt and the binding has been chosen but not made yet. 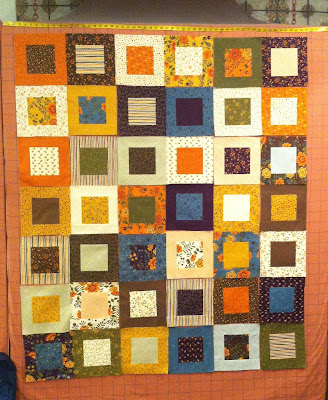 As a matter of fact, I have the backing ready for three quilts. I realized that it one thing that tends to slow me down, so I decided to piece the backings so I have no excuse to wait for the quilting. 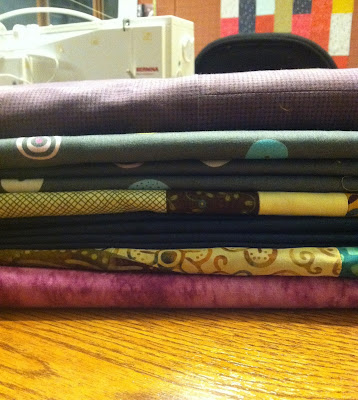 There is another small quilt on the design wall, but I just threw those pieces up there with no real sense. They are left over pieces from another quilt I made and I was going to use them when I pieced the backing. I decided against that and thought they would make a cute baby quilt. I'll show that in the next couple of days.

Speaking of quilting, my friend Judy quilted my Four Winds quilt and I picked it up from her yesterday. I turned out really nice and I'm working on the binding. I decided that the binding will be scrappy and will be made from what was left after cutting the fat quarters for the triangles.  I'll get a picture of the entire quilt after it's bound.

Beth's Monday Making
Posted by Joanne at 2:26 AM 3 comments:

Quilts in Progress - Catch Up Time

I had quite a busy week. I subbed a couple of day, helped with some sick grand kids, spent fun time with grand kids, and actually did some sewing.

Avery and Peyton were not feeling well, but snuggling up in their mermaid tails certainly helped. I know I'm prejudice, but I think they are so darn cute! 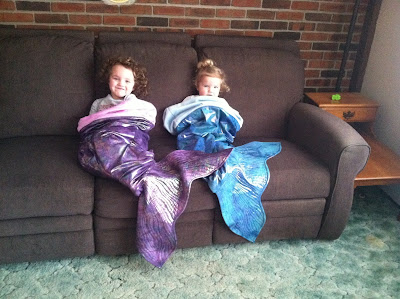 This picture makes me laugh out loud! When it was nap time, Peyton wanted to keep reading instead of lying down. This is the face she made. I had to tell her twice, and the second time I was ready with the camera.  hahaha   I can only imagine that is the kind of face I'd make if someone told me that I had to stop sewing and go to sleep. 😏 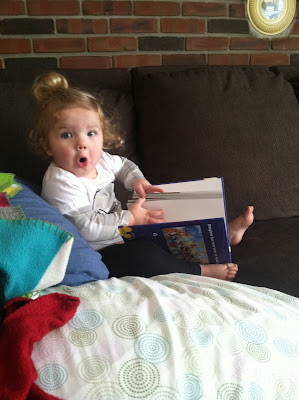 Ronan was excited that I picked him up from school and that I was hanging out with him and his sisters. When he did the fist pump, he said, "Yes!" I'm sure I look like when someone asks me to go fabric shopping with them. 😂 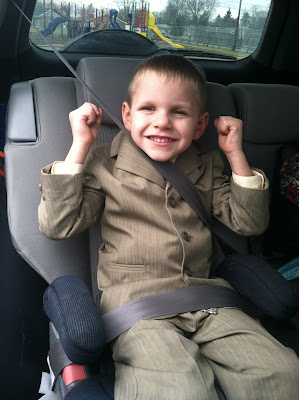 I didn't get to spend nearly enough time with this whole bunch, but I loved every minute that I was there. 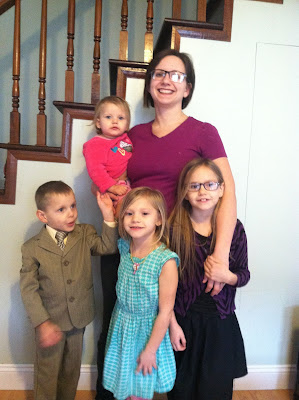 I did say that I got some sewing done. I don't have pictures of everything, but I've been working on projects made from layer cakes and jolly bars. (I have a couple of trunk shows coming up and I wanted to update and replenish my quilts.)

These two small quilts actually have pieced borders now, but I didn't take pictures when they were still on the wall. They were made entirely from a single layer cake and they measure approximately 36" square. 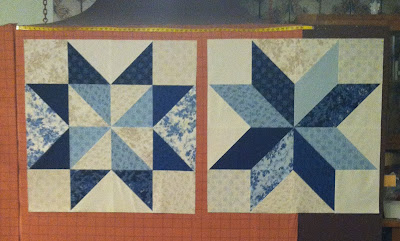 On Monday, I posted that I was working on my Precious Gem quilt. All of the 5" x 10" rectangles are sewn, trimmed, and pressed. I've got this pile of 84 HSTs almost all pressed and trimmed too. I hope to get both projects pieced this weekend or early next week. 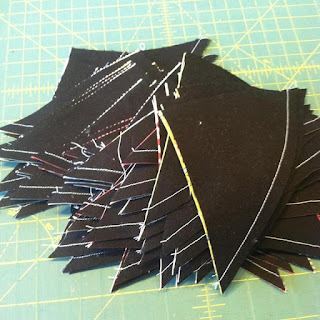 While I've been working,  Jack's been working on a few of his own projects. Here's the heliograph me made from scratch. He and a friend have been trying to make this work, but they need good sunlight for it to function properly. They are going to try this afternoon, even though it's going to be cold. 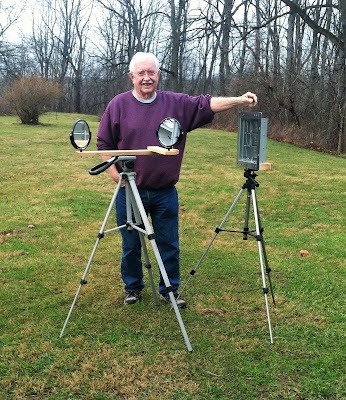 Maybe the decent weather will encourage me to take some quilt pictures outside. Or, maybe I'll just stay inside and sew.
Posted by Joanne at 12:17 AM 1 comment: