I am participating in the Color It Red Blog Hop next month so I'm playing around with some red squares today.

I've got a couple of UFOs that "fit the bill," but of course I decided that I also want to make something totally new too. 😏 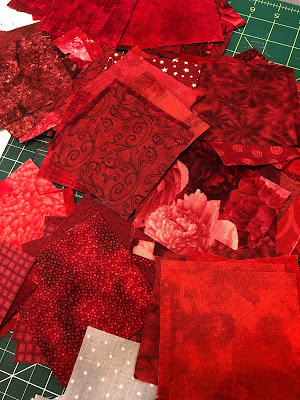 The funny thing about pulling all these red fabrics is that some don't look red once you put them next to another red square. I'm using them anyway, because I just really want to use up these pieces and it really won't matter in what I'm making.

Do you see that little piece of grey dot fabric? That's the only other color/fabric that I'm using for the quilt top.

I don't even have the top half together and Jack is already talking about the binding. He wants something other than red. We'll see....

I'm not quite sure when I'm scheduled to post yet, but I'll let you know as soon as I do.

From Leader/Ender to Main Project

I love it when a leader/ender projects moves from that to the main project. It feels like progress to me.  :-)

On New Year's Eve, Pat Sloan started her Traffic Jam Quilt Along. I already had a bunch of correct-size pieces left from various projects, so I decided to jump in and sew along with the group - sort of...

I've got lots of projects on which I'm working, but I always need something simple to use as a leader/ender project; and making simple, scrappy, blue four patch units was perfect. 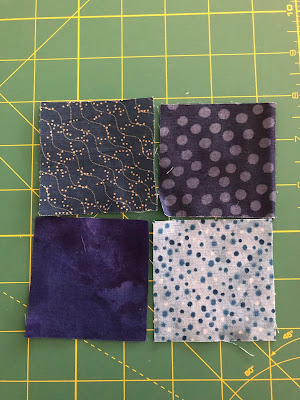 I really didn't think about how I was placing the squares. The only "rules" were that they had to contrast at least a little and no two same fabric squares would be used in the four patch. I didn't care if there was only one "light" and the rest were dark or medium. I just want a bit of contrast between the value and or design.

Here's a few of the 100 four patch units I needed to make. I've adjusted the pattern layout from Pat's version so that I can use the quilt as a Quilt of Valor. 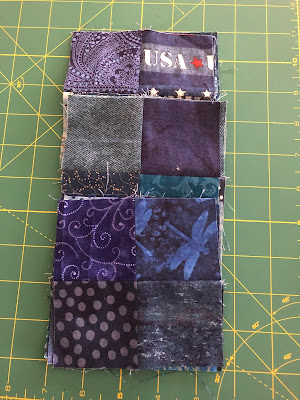 I am working on a pattern test for Rachel Rossi and these four patch units were perfect as leader/enders. Yippee!

All 100 four patch units are made and since I'm at a stand still for the pattern test (an adjustment is being made and I have to wait for more info), I've started to make the Traffic Jam blocks. (It's not like I have nothing else on which to work, but I decided using up these scraps were like finishing a UFO. That's logical, right?) 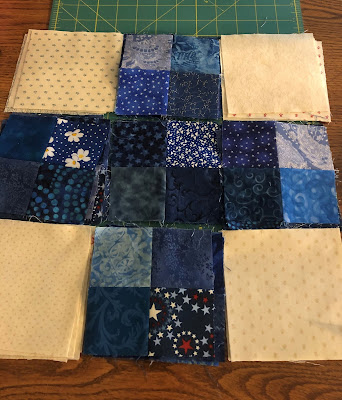 I already had most of the light corner pieces cut, but I needed a few more so I trimmed down some charm pack leftovers that had made their way to the scrap drawer.

You can see that I printed Pat's Traffic Jam pattern and made my version change notes right on it. It looks like scribble, but I understand it.  :-) 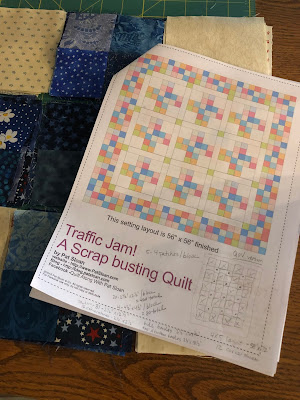 With this progress, it's time to start another leader/ender project so I'm adding triangles to charm squares. I'll be making 42 square in a square blocks that will have two alternating triangle fabrics. 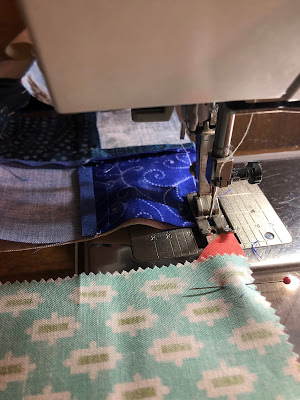 What I find quite exciting about this new leader/ender project is that these fabrics have been packed away for quite some time and I know exactly when and where I bought them. I am using the three fabrics on the right side of this very bad picture. The two on the left were used a long time ago.  :-) 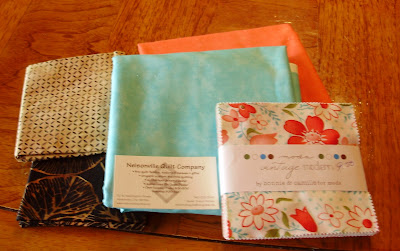 I am somewhat embarrassed to admit that these were purchased during one of our annual sisters' weekend back in 2012. I had an idea for how I was going to use them when I bought them; but I decided against that plan and just set the fabrics aside - until now.

Just like the four patches, it's a simple sewing step, so this project will be ready to become the main feature pretty quickly too.
Posted by Joanne at 11:43 AM No comments: