I've been a bit more productive than anticipated, which is always a good thing.

You know the saying that "it takes a village?" Well this quilt took a small village to complete it. Jackie pieces the blocks, Jerry sewed the quilt top, and I quilted and bound it. It is an adorable little quilt and I love the pops of color. The pattern is called It's Five to Ten, by Far-Flung Quilts 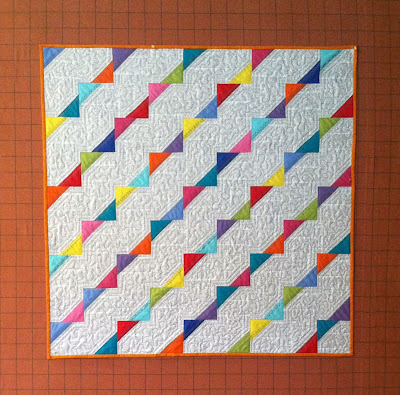 I made Sadie's mermaid tail and LOVE how this turned out. I'm pretty sure she is going to LOVE this too. 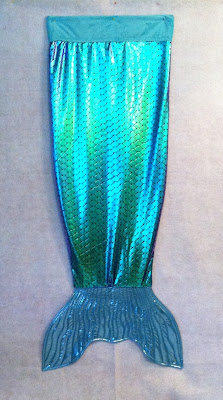 I am so pleased with the scale like fabric and how the tail quilted up. The scale and tail fabrics are a stretchy performance fabric and I had never worked with them before. I didn't have trouble, but I did use a walking foot and I pinned and used wonder clips a lot. I lined the entire thing with a fleece that was the perfect color for this. I used the fleece for the cuff at the top also, because I thought that would feel nice and snuggly against Sadie's face. 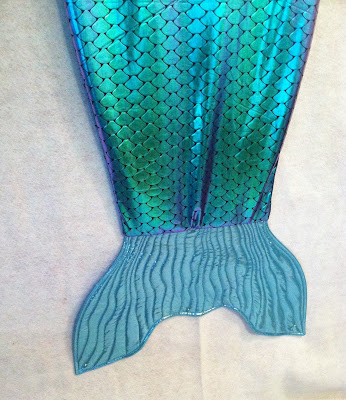 It's fun how the fabric changes color, depending on how the light hits it. 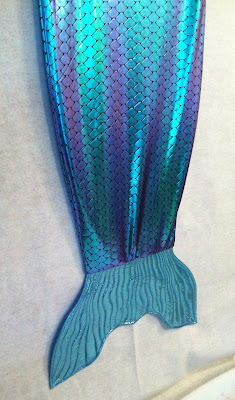 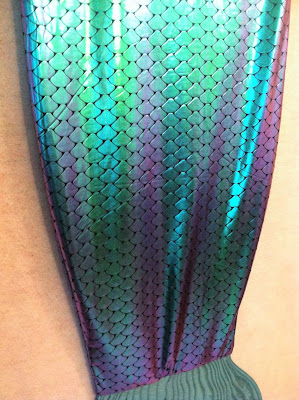 I have a feeling that I'll be making a few more of these. To mix it up a bit, I'm thinking about a dolphin, whale, and shark. :-)

I've been able to finish up a few other items, but I don't have pictures. I'll get those taken soon and post them later this weekend or early next week.

Check out what other quilters have been working on lately.

Go to Sarah's
Confessions of a Fabric Addict
Posted by Joanne at 12:22 PM 2 comments:

I have been very busy continuing to play catch up here and I'm not doing too bad so far. I really want to get a bit more caught up before I begin my long-term sub assignment late next month. There are an awful lot of projects that I need to do, so I'll just keep chugging along. Some of the projects are UFOs, while others are gifts or promised things. I'll just keep plugging along and am sure it will all work out well.

Remember the quilts I made for my friend's chemo nurses? I made one more, for a nurse who wasn't really forgotten about, but she had been gone so she didn't get put on the list. Her quilt is done and ready for delivery. (Sorry for the crappy picture.) 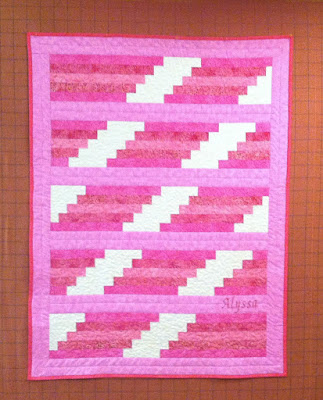 I also had to do some fixing on two of the other quilts. All of the quilts have names embroidered on them. Well, I guess we should have tripled checked spellings because two of the names have unique spellings and I had to rip out the embroidery, redo it, and then put the quilt back together. Because I had embroidered on just the quilt top, I actually had to rip out binding and quilting before I could get to the embroidered area. I then had to take a couple of blocks apart and then redo and add the embroidery back in. YUCK! On one of the quilts, the embroider spanned two pieced blocks and that was a real pain. It actually took just about as long to fix this as it did to construct the original quilt top. Lesson learned!

And because I know myself and recognize that if all I was doing was working on UFO projects I'd go bonkers, I cut strips for a quilt I've been wanting to make for Jack. I pieced the strips and am piecing the blocks as a leader and ender project. 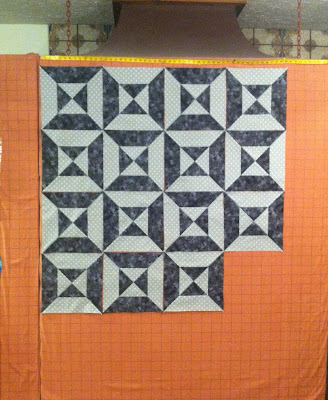 I am using stash for this quilt and thought I would be happy with only making 20 blocks and then adding borders, but I've decided that won't work. I don't have enough of the light fabric to make this quilt with a 5 x 7 layout and the 4 x 5 layout is going to bother me. Do you notice that in the top row, if I only have four blocks, the first and last blocks will not be symmetrical? In the first block, the dark is on the top but in the last block it is on the sides. I know that is pretty minor, but it will bother me so I had to make an adjustment.

My first thought was to finish this as planned and give it away, but then I thought that I really like these fabrics and want to make it work somehow.

I decided to add a third fabric and make some blocks with yellow instead of the light grey. I like how this is working so far. I didn't really doubt that I would like it because I have always liked yellow and grey together. 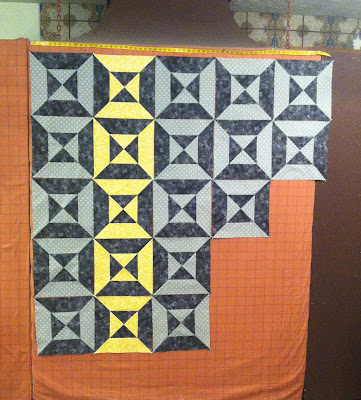 I wasn't going to show this to Jack (it was going to be a surprise quilt), but decided that I would to get his thoughts on adding the yellow. He likes it and is leaning toward adding two vertical columns of yellow blocks (second and fourth columns) instead of the random placement I had thought about. I have more of the original blocks to piece and will make those before I sew more yellow blocks. Since it's his quilt, I'll let Jack make the decision on how this will be laid out.

Unfortunately, I probably won't be working on this very much over the next week because of a very busy schedule, but I'm ok with that. It fills my need to work on something new, while finishing something old. :-)

For inspiration and eye candy, check out

Monday Makings
Posted by Joanne at 9:57 AM 2 comments:

It's been a while, hasn't it? Sorry! Life got in the way, and even though I'm in full-swing with lots of stuff, I read about Needle and Foot's Handmade Halloween Link Up and had to stop and take time to write this post. 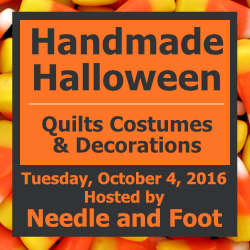 I love Fall! I love the colors, the cool, crisp air, and the sound of the local high school marching band practicing every school morning and then performing at half-time during home football games. I love apple picking and making applesauce, and then watching my grandkids devour it. I love bon-fires and jumping in leaves. I love driving around and looking at the amazing artwork that pumpkin carving has become, and I love that my kids and grandkids love Fall.

If you feel the same way, join the link party and then come back on October 4th and be prepared for some eye candy.

Happy weekend, Everyone!
Posted by Joanne at 1:01 PM 1 comment: