It's been a long time since I've posted.
"Life" happened and I chose to deal with that rather than post here. I know you've all been there and done that, so you understand.


Be sure to scroll down toward the end of this post to see some wonderful pictures I took while I was away. Even with my limited photography skills, they are BEAUTIFUL!

Now, back to quilting...

I have a few projects that are in different stages of completion and although they are not technically "on" the design wall, they are the projects on which I'm working.

I belong to the Cleveland Modern Quilt Guild and we had a "Black and White Plus One" challenge. I loved the idea and had already been thinking about a project like that, so I was thrilled when the challenge was announced. Here are the fabrics I chose. 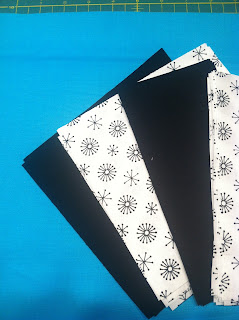 I recently bought a pattern by Elaine Wick Poplin (messygoatsews.com) called Mad as a Hatter and knew that it would be perfect for the challenge and fabrics. (Of course I made some changes. Don't I always?)
Here is the first step. I love the little punch of blue! I was only going to make a small wall hanging (hence the nine blocks here), but quickly decided to make it a little bigger. I would have made it much larger if I had more of the blue! ﻿ 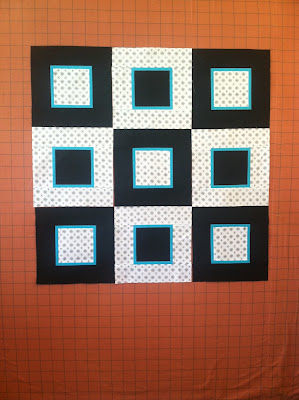 After some slicing, dicing, and rearranging, this is the quilt now. I LOVE it! I was playing around with border options to make this larger, but thought that the borders just messed up the overall look. This is small - approximately 38" x 50", but I'm ok with that. I still have to quilt this and will bind it in the blue.﻿ 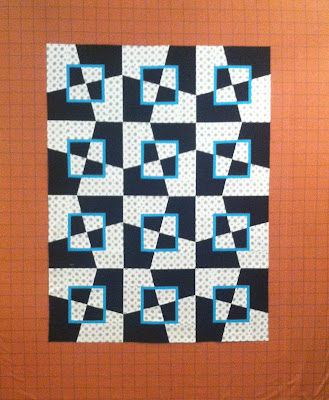 My 16 Patch Kaffe fabric quilt top is done, but I don't have a picture of it with the outside border.
﻿ 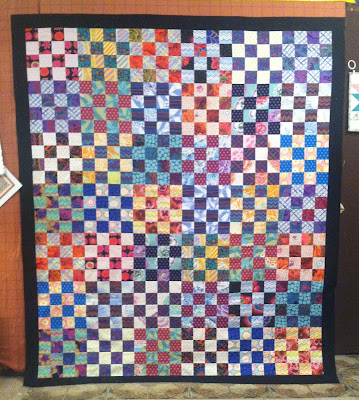 I had partial strip sets left over so I decided to make a smaller version of the quilt so it could be used on the day bed that is in the same room where the larger version will be used. I had to make some adjustments here; and instead of a 16 Patch block, I made 12 patch block. This worked out perfectly because the day bed is long and narrow, so the elongated blocks are just what I needed. The picture below shows my two border fabric choices. I chose the one on the right and was thrilled to have enough of it to use for both quilts. Unlike the fabric on  the left, the fabric on the right had been used in the quilt so it all flows nicely. Plus, the fabric on the left has a brown background to it, rather than black like the blocks. I love it when things work out well.  :-) ﻿ 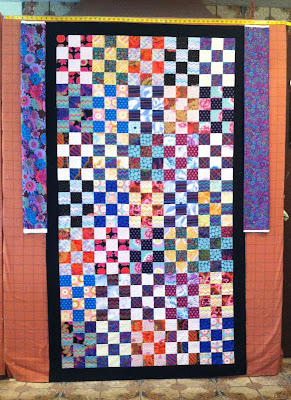 I'd love to say that I will have these all quilted soon, but I doubt it so I'm not even going to pretend that will happen. I am still playing catch up from when I was gone and I will be starting a long-term sub teaching assignment shortly that will last through the end of the school year.
What's on your design wall today?
Check out the eye candy at
Judy L's Patchwork Times
and
Monday Makings
Remember those pictures I mentioned?
They will follow this brief background.
I had the honor and privilege to spend almost two weeks with a loved one as she approached the end of her life. I stayed with her and her family, helping as needed. Most of us don't want to talk about death and dying, but the fact is that it is a part of life. Yes, it is a sad part, but it is still a part.
During my time with them, I helped with giving medicine, taking care of any and all of her physical needs, reminiscing about our lives, and just helping to provide as much love and support as possible. We all laughed and cried (a lot), but I knew my role there was important.  I know that many people will think this is strange to say, but it really was a beautiful experience.
One week ago today, on April 18th at approximately 4:00pm, my sister-in-law Becky passed away surrounded by people who loved her. We knew it was coming, and we were as prepared as anyone can be. That morning, we were all awake watching the most beautiful sunrise that I think I have ever seen. It was so peaceful and beautiful that I knew that was the day she would go.
This is the view from the house and the room where Becky was. The picture does not do it justice. The colors were stunning! 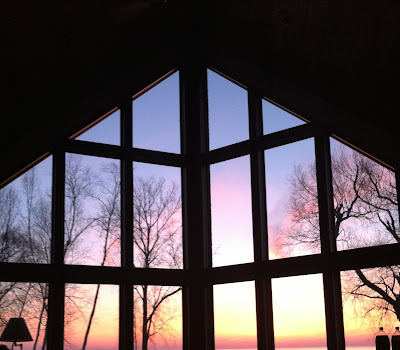 I stepped outside onto the patio and took this picture. Do you see the ducks on the lake and the birds in the sky? 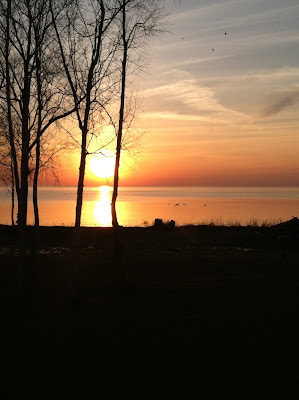 I sure hope this video works! Take a moment and listen to the sounds of Lake Michigan at sunrise on April 18, 2016. I will never forget this wonderful calmness and beauty.﻿ 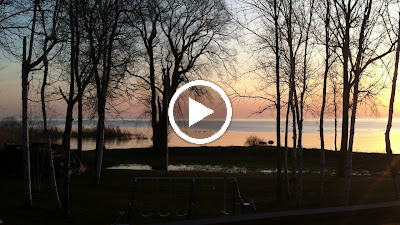 We love you Becky!
And to bring things full circle...
After the burial, two of my granddaughters looked with wonder at the dandelions and made us laugh as they picked and played with them. They squealed with joy at this thing we so often take for granted and even curse.
Live, Laugh and Love every day of your life!﻿ 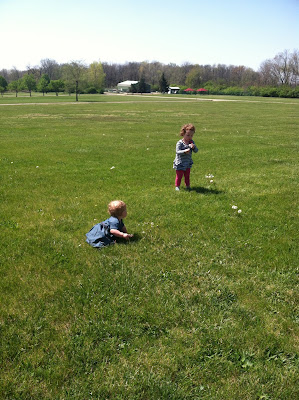 "Tip Tuesday!" - Cone Thread Help
I love learning new things and then sharing that knowledge with my quilting friends. So, every Tuesday I'll provide some tips, hints, tricks, tutorials, shortcuts, etc. that I've learned over the years and share them here on the blog.
"Tip Tuesday" will be a collection of information about a wide variety of subjects garnered from a large variety of sources.  I am not an expert by any means and do not take credit for being the great wizard behind all of these hints and tips. I will gladly give due credit whenever possible.

These tips will be archived and accessible to you just by clicking on the "Tip Tuesday" tab above.
Read, enjoy, and be inspired!

I'll admit it.
I love thread!
Since I use a lot of it, I prefer to buy my thread by the cone. I feel like I get a much better deal and it is such a great feeling when you empty a big cone of thread. It makes me feel like I've accomplished a lot. :-)
My favorite thread is So Fine #50 by Superior Threads. I use it for piecing and quilting and have always been happy with the results. 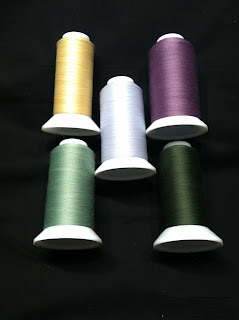 Even though I generally use a neutral color for piecing, I do have quite a variety of colors, and just seeing all those colors makes me smile.
If you've been a reader of my blog for a while, you may remember these pictures from a few years back. Quinn and Sadie were entertained for a very long time while playing with thread. 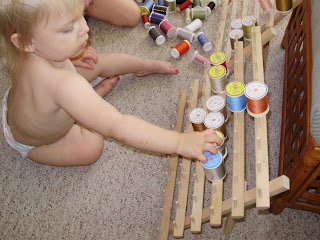 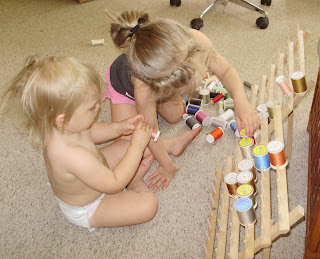 This is my version of "thread play" and it always makes me smile. All of the grandkids love to play with my thread; and yes,  I let them. They've been known to spend up to an hour organizing the thread by color, type, etc. They play "server" and ask us if we'd like a green and blue thread combo. They even try to create pictures with the spools.
These pictures don't show it, but there are a few cones that I allow them to play with, but's usually just the smaller spools because they are easier for them to handle. (I really do need to get an updated picture. Ronan, Avery, and Peyton love to play with the thread and I'm sure Bailey will when she's a little older.)
I have a number of students who tell me that they cannot use cones because they won't fit on their machines. I have a couple of suggestions to help with that problem.
First, I love my thread stand!

There are a bunch of thread stand out there but this is my favorite. It's from Superior Threads. This holder can be used for cones and spools up to 3.5" in diameter. It can be used vertically or horizontally, and it's portable. The "mast" fold down and the entire stand fits right in  my machine case.
Before I got this stand, I had this one. (I still have it and use it when I have friends over to sew.) I bought this from Superior Threads and even though it looks like the ones you can get at the discount stores, this one has a metal base which provides stability and doesn't tip over easily. It can be dismantled for travel, which is great.

So what do you do if you want to use cones but they don't fit on your machine and you don't have a stand?
How about making it work by putting the cone over a smaller spool that fits on your machine?

photo from Quilting Hack
The cone now fits on the machine!

photo from Quilting Hack
Do you have another way to use cones of thread that don't fit on your machine? If so, please share your tip.
If you've never tried it, why don't you give cone thread a try and let me know what you think?
I have a suspicion that you are going to love it. :-)
Posted by Joanne at 12:47 AM 4 comments: