Well, there has been quite a bit of news around here this past week.
Zach had a job interview in Cincinnati and he got the job! It's great that he found a job in the field that he wanted and that it is close to UC so Nikki won't have far to travel when she's back at school. The news is great, but kind of bittersweet at the same time. He, Nikki and Quinn were going to be moving to Cincy in June so I was ready for that, but now the move will take place much sooner. I thought I had some time to prepare myself, but I guess I have to get ready NOW. It sure will be hard to not see them so often. Quinn has been walking, actually running is a better way to describe it, for about a month now and she just jabbers all of the time. I'll miss that, but as Jack said, Cincinnati is less than 4 hours away, so we'll just have to make a lot of road trips!
I've decided to look at the positive side and recognize that there are a lot of quilt shops between here and Cincy that need for me to dicover them!
More BIG NEWS
Nikki and Zach are ENGAGED! 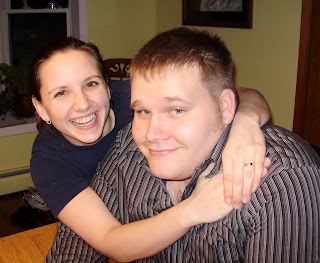 I'll get a better picture of the ring later, but my batteries were dying and this is the only picture I could get. What do you think? Are they happy? No date has been set yet, but it will not be until after Nikki graduates.
I've actually been doing a bit of sewing. I've been working on the guild mystery quilt, my letter S for the alphabet swap and the raffle quilt (Bonnie Hunter's Double Delight). I've also been working on some embroidery that needs done for an order. 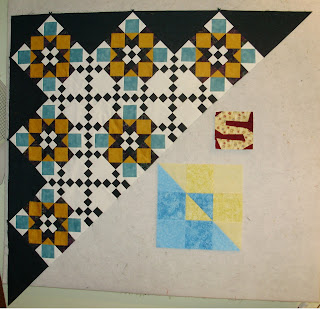 I'm trying really hard to take care of my UFOs before I start something new, but I've got a couple of quilt designs that I'm playing around with and I want to start those NOW.
More to come later, and you can be sure that there will be pictures of Quinn.

Hi Joanne, I wanted to thank you for playing along on the ice cream social. Your flavor is Peanut Butter 'n Chocolate. You can see a picture of your flavor here. http://www.baskinrobbins.com/IceCream/classicflavors2.aspx Again, thanks for playing and have fun! :D Oh... and it looks like congratulations are in order too.

What a lovely quilt!