This is what's up on the wall this morning and I know that it may be a bit bright or bold for some of you, but I love it! 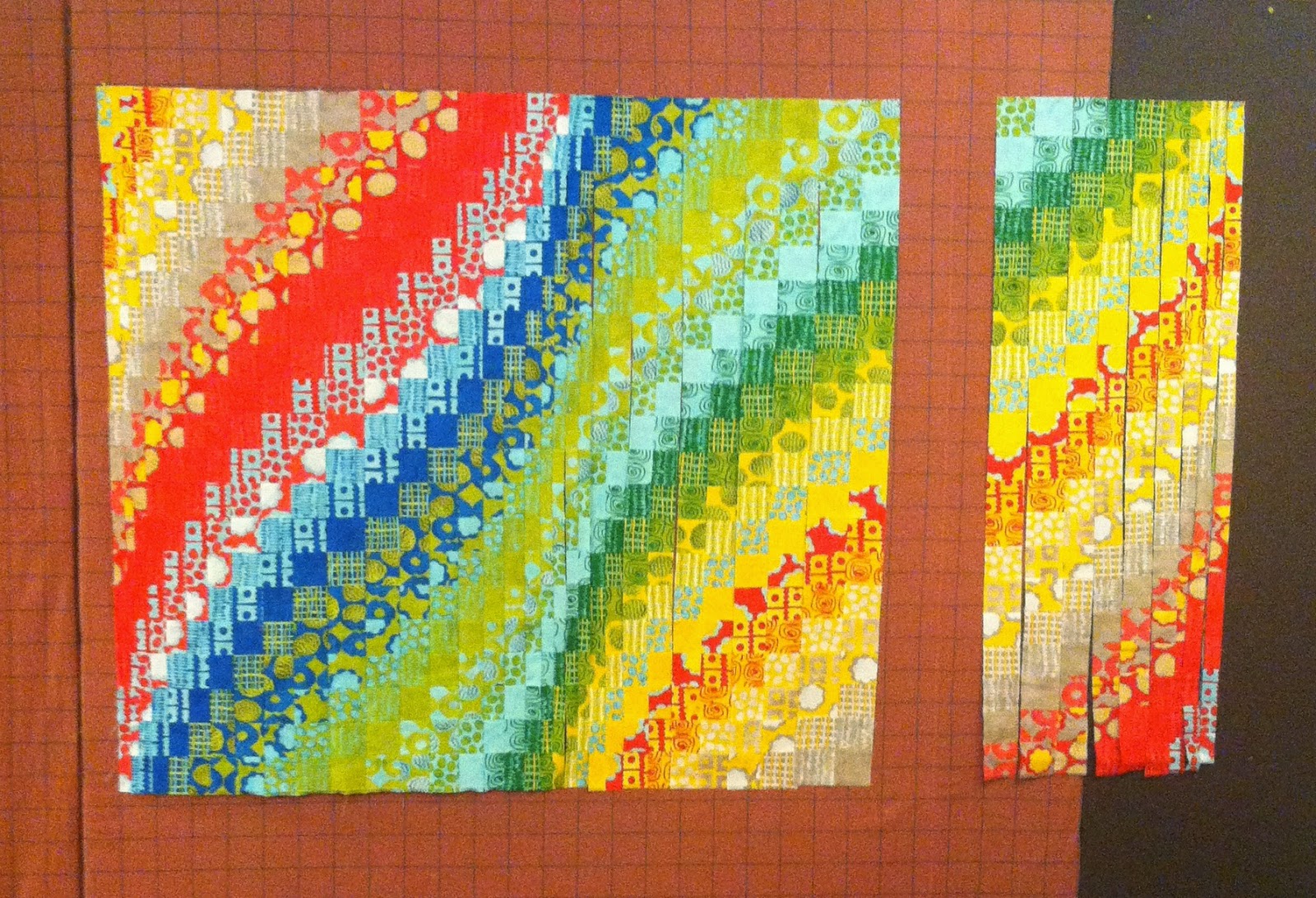 This past weekend was our annual guild retreat and I had been hem and hawing around trying to figure out what I wanted to work on while I was there. I have lots of projects that I should be finishing up and I could have taken at least one of them, but something was holding me back from making a decision.

Well, the decision was made for me when on Thursday I went to the new quilt shop in Sandusky, M & E Quilt Shoppe. I know the two owners (they are former students) and we've been talking about me teaching some classes there. (YEAH!!) Anyway, while I was there, we picked out a couple of patterns and fabrics for me to make samples. Before I even walked in the door, they knew they wanted me to make something using the From Outside In line. I was excited that they picked that line. It is awesome!! But then we had to choose a pattern...

I've had the I Used To Be a Layer Cake pattern (by Nancy Altsman for Black Cat Creations) for a little while, but haven't made it yet and the shop has the pattern so I figured, why not? What is so cool about this pattern is that you can make a small Bargello quilt using a layer cake or a jelly roll and the pattern includes the instructions for three different versions. AWESOME!! If you want a larger quilt, simply make more small quilts and put them together. The pattern explains how to do that. 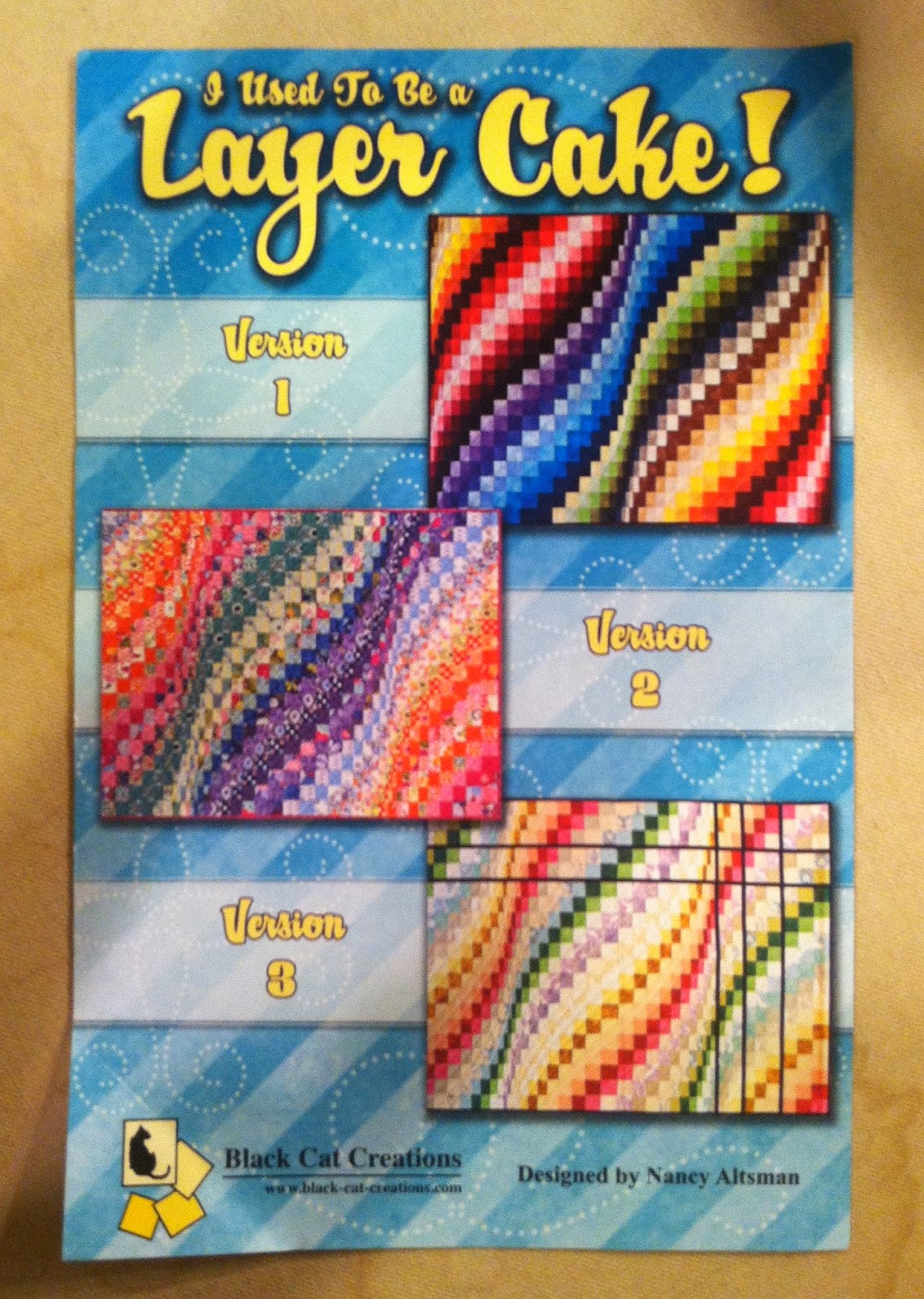 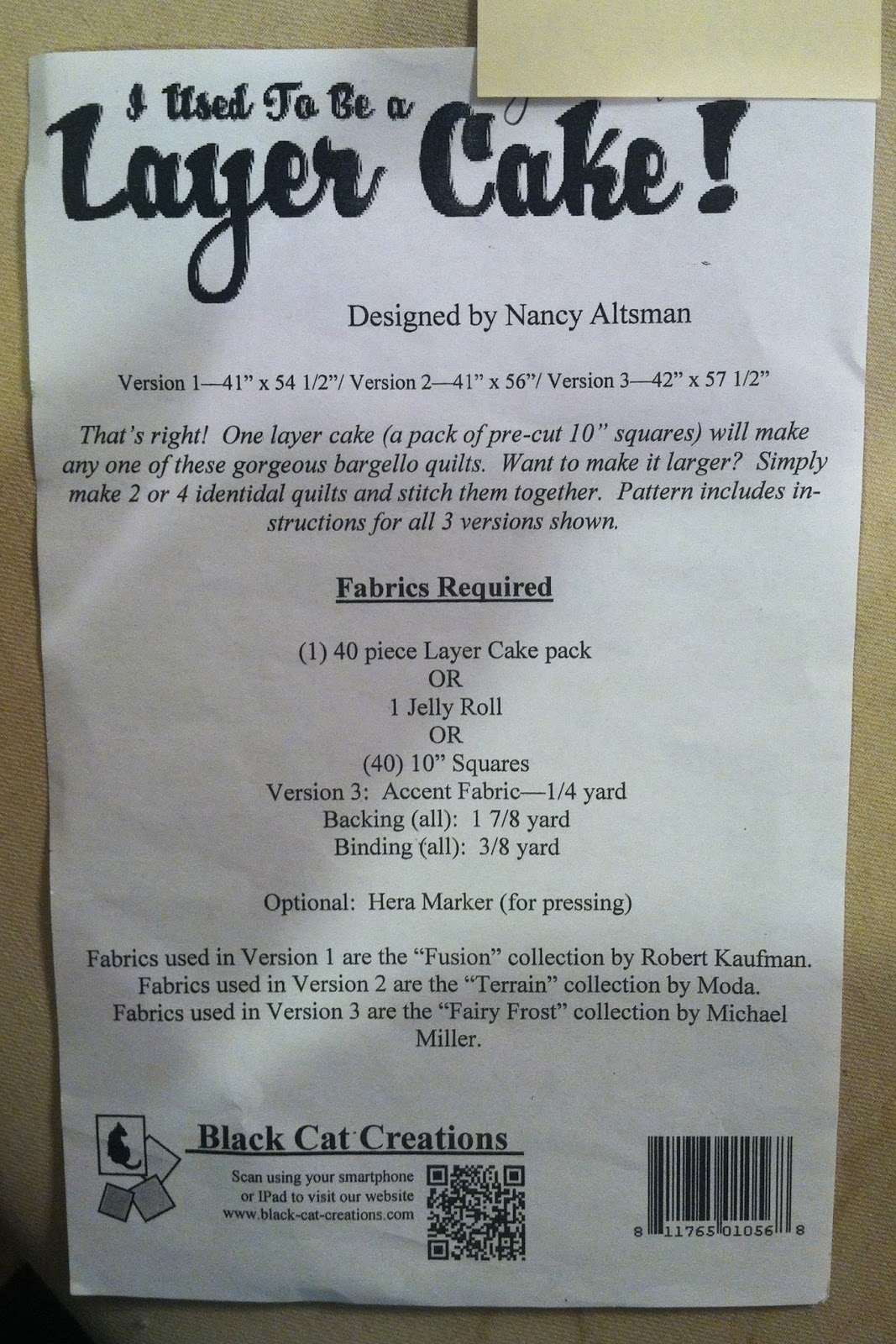 Knowing that it might be a bit challenging to organize at the retreat, I did some preliminary work at home. I decided to use the jelly roll first and pulled it apart and organized the strips in a pleasing order.

And then I cut the strips into 10" segments (I'm going to advise students to cut them a little longer if their strips allow for that because after trimming, you only have about 1/8" to spare and that is living life a little too dangerously for me).

Next I sewed the 10" segments together to get four of these lovely strip sets. (While doing this, I changed the order of a few of the fabrics.) I made one of these strips at home and sewed the other three at the retreat.

Once the strips are made, you sewn the two ends together to create a tube. (For those of you that have made a Bargello quilt, I know this is old news for you, bu this is my first one and I found the process intriguing.) Following the chart provided in the pattern, I then cut the tubes into varying widths and then started the process of creating the columns of the quilt. It took a bit to get myself acclimated to doing this, but once I did, it was ok.

I decided that it probably wasn't a wise choice to take this project to the retreat because it really helps to have a design wall or to be able to lay everything out to avoid mixing up the strips, etc. Lesson learned! But, having said that, this experience allowed me to make notes on how to help students keep themselves organized and avoid a few of the issues I encountered.

So, here's what I had sewn at some point on Saturday. 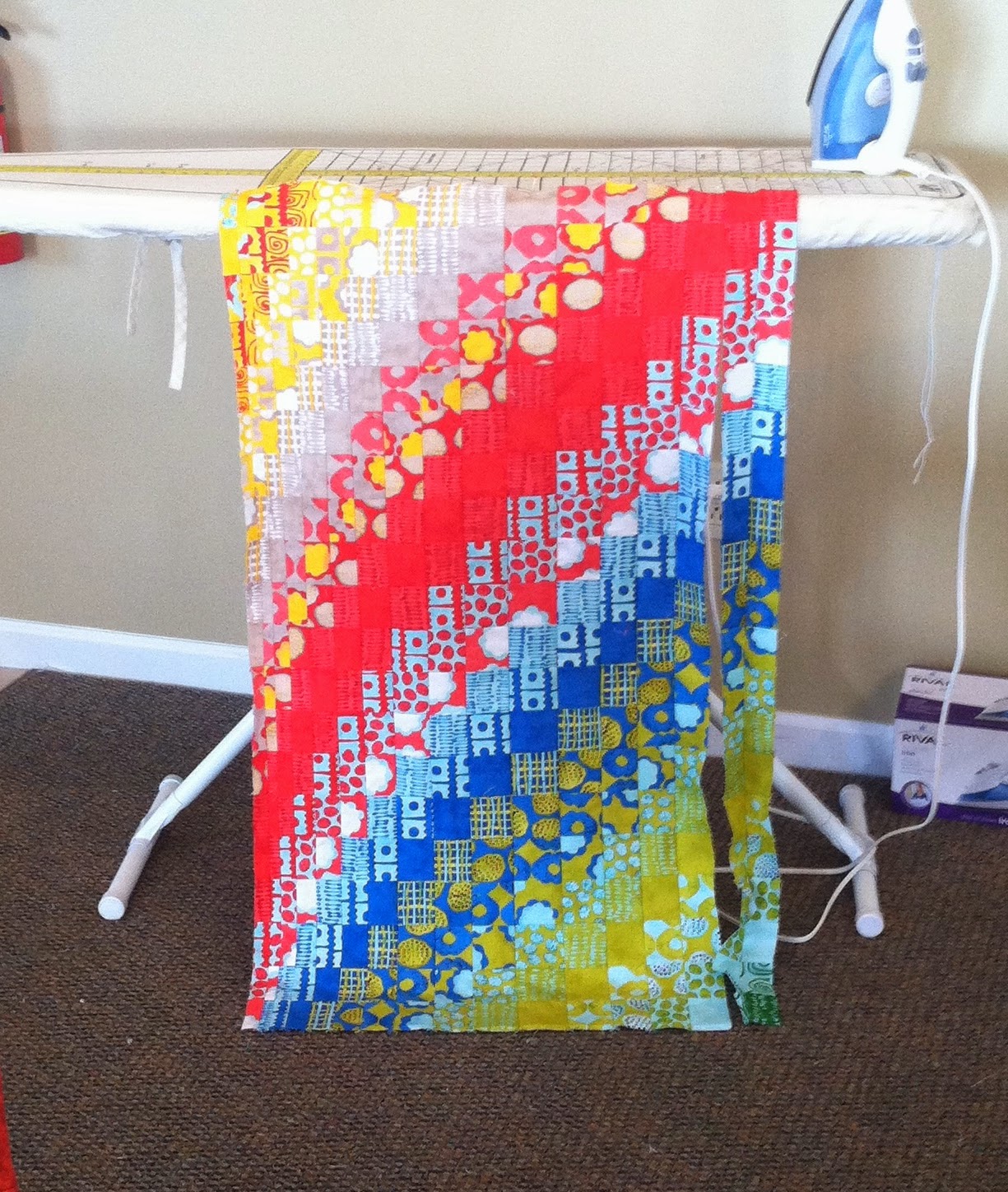 I hope to be able to get some sewing time in later today and get this top finished soon because I'm looking forward to making version three using the Wishes layer cake! I'm using a dark chocolate brown for the accent strips.

This isn't on my wall, but this is the quilt that my brother Jerry quilted while he was at the retreat. I love this!! The picture does not do this justice and he still has to tie his thread tails and bind, but it is awesome in person. He also sewed together a couple of practice quilts so he can work on his machine quilting technique. He was VERY productive! 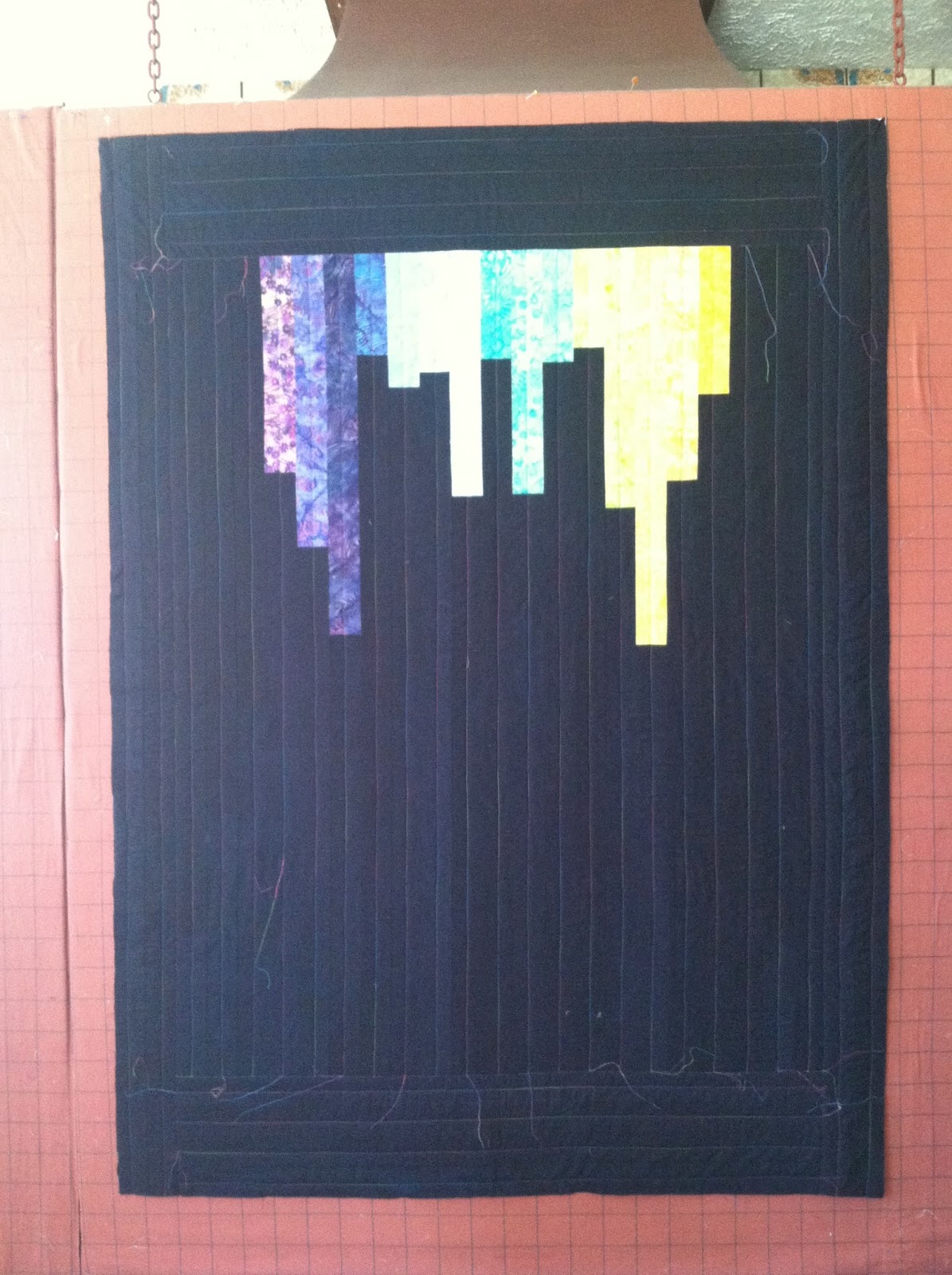 What's on your design wall? Why not share it with us at Judy L's Patchwork Times?
Posted by Joanne at 10:11 AM

OMG I have to get that pattern!!! Yours is gorgeous! I did a scrappy bargello using Bonnie Hunter's pattern and despite my er. . . mishaps turned design changes, I love how it turned out! This pattern has more movement - LOVE!!! Thanks for sharing it!

I too find this pattern quite stunning - and fun! Great movement thru the whole piece.

What a fab idea to make a bargello quilt from a jelly roll. I am working on Bonnie's pattern as well but these fabrics looks fantastic and the pattern sounds intriguing. Your students will be lucky!

Beautiful quilt! A bargello quilt is on my bucket list. Maybe not this year, but soon.

Your Bargello is my kind of quilt! I love the bright and bold and yours is gorgeous. I'm going to have to look for that pattern, too.