I've finally finished all of the blocks for Jack's grey and yellow quilt. He decided that he wanted two vertical rows of yellow blocks, so that's what he's getting. I still think I would have liked just one row of yellow (second row from the left), but since it's his quilt I let him decide. Perhaps I'll have to make one for me and just have the one row. :-) 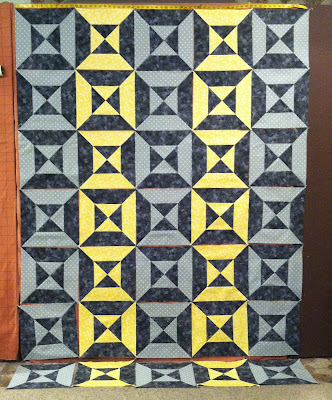 I still have a bunch of work to do before I start subbing long-term, so I don't know when I'll get this sewn together, but hopefully it won't take long.

I've been working on this and one other project as a leader/ender project, so I actually have two quilts that are ready to have bocks sewn into rows. I'll get this quilt off the wall and organize the rows so they are ready to sew and then I'll put the other blocks up and take a picture.

The second project is a simple quilt made using 48 - 5 rail fence blocks, and I've used just three fabrics throughout the entire quilt. It's a Quit of Valor project and I'm excited to say that all of the fabric has come from stash. YIPPEE!

Check out what other quilters have on their design walls.

Monday Making
Posted by Joanne at 12:16 AM

This is going to be a great quilt!
Cheers,
Emese

I love the yellow and gray. Very nice.

Very dramatic, the yellow with the gray. It always amazes me how fast things can come together when you make them as a leaders and enders project.