Ok, I've decided to join a couple of UFO challenges this year (Judy's Patchwork Times and Nancy's Patchwork Penguin) and I'm still trying to get the projects "lined up." Since I have a fair number of projects that are very near completion, I've decided to divide the projects into two groups - Near Done and Nowhere Near Done. I will label projects in each group 1-12. When the project numbers are posted each month, I will pull one Near Done and one Nowhere Near Done project. My thoughts are that the projects in the first group shouldn't take very long to complete (quilting and binding only, or borders, quilting and binding) and that will either be my "swift kick in the butt" to get busy or my "feel good" project because I finally finished something! Either way, I win because I WILL complete the project during that month.

Now, chances are that some of my Nowhere Near Done projects will end up in a 2012 UFO Challenge, but hopefully they will have switched groups.

Since I'm still going through my projects I haven't assigned numbers yet, but that should happen by tomorrow night. Here's a picture of what I have out so far. 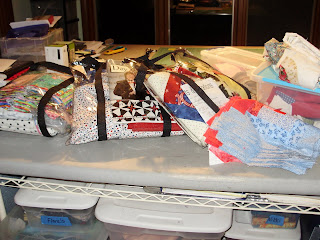 I also decided that I would not include projects that are kitted but no cutting or sewing has been done yet. I don't have many of those, but I do have a few. I did this "kitting" after a couple of instances when I had specific fabric that I wanted to use for a project that I had inadvertently used for something else. I was sooooo bummed and had to find new "just the right" fabric.

Anyway, I guess that since I've made it official with this post, I'm getting excited to take care of some unfinished business!

What about you? Are you up for the challenge?
Posted by Joanne at 6:27 PM