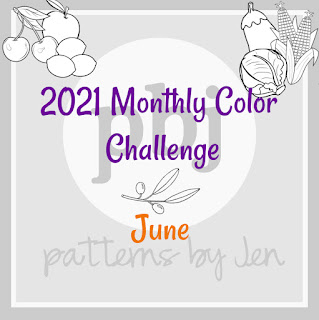 It's a new month and a new color!
June's color is orange
and the featured food is
Pumpkin 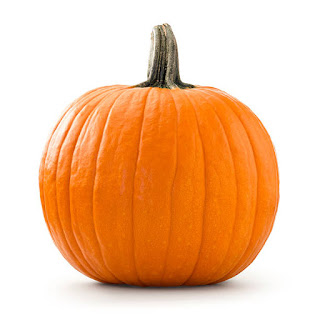 Pumpkins are native to North America (northeastern Mexico and southern United States), but they are now grown world-wide. As a matter of fact, pumpkins can be and are grown in six of the seven continents. Only Antarctica is unable to grow them.
Pumpkins are a warm weather crop that are usually planted in early July. They need soil that retains water, yet drains properly after heavy rains. Even though this may sounds challenging, pumpkins are quite hardy. Even if the leaves are damaged or part of the vines are removed, the plant can usually regrow secondary vines and still produce the fruit.
While pumpkins can come in a variety of shapes and colors, ranging from white to very dark green, I'll be focusing my information on the typical (to me), orange variety.
Pumpkins are produced for a wide variety of reasons, including food (both human and animal) and commercial or ornamental sales.
In terms of nutrition, one cup of pumpkin has 87% of the daily recommended vitamin A intake, and is a good source of fiber. It is basically fat-free, cholesterol-free, and sodium-free. All in all, pumpkin is basically a healthy food to consume. 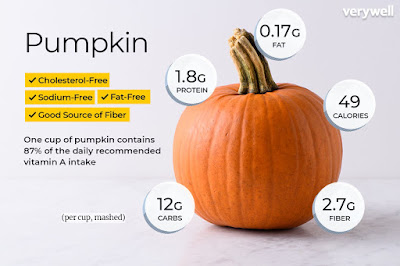 Pumpkins are very versatile in how they can be used for cooking. Most parts of the pumpkin are edible, including the shell, the seeds, the leaves, and even the flowers. It can be boiled, steamed, or roasted and is often used in soups and purees. Of course pumpkin puree is used to make an amazing pie that many people eat at Thanksgiving. (FYI - pumpkin pie is good ANY day or season!)
Pumpkin can also be made into oil by roasting the seeds and then pressing them. The resulting oil is quite thick and has a very robust flavor. While it's often difficult to find near me, when used in salad dressings, it adds a delicious and somewhat nutty flavor.
We all know that pumpkins are harvested in the Fall and used for many Halloween and other Fall decorations. I always find it amazing how intricately some people can carve their pumpkins; and while I've tried to do something fancy, I'm a simple "cut out triangles for the eyes and a jagged mouth" kind of gal.  :-)
You could go even simpler and do this for decorating. 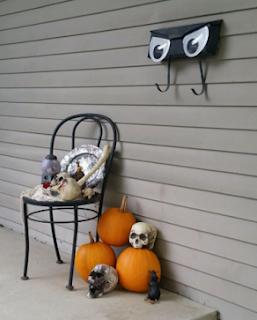 Yep! Sometimes I just don't feel like or have time for carving a pumpkin, but I still want to decorate. This set up was at my daughter's house and I love it.   :-)  Easy, peasy!!
But, I have to admit that my favorite Halloween decoration of all time includes a quilted project and I still pull it our every year. These pumpkin placemats are an adaptation of an Eleanor Burns pattern. I've added the face cutouts so the placemats are interactive. 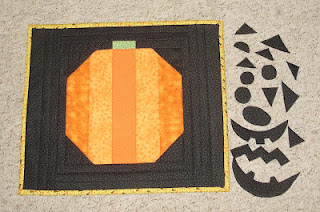 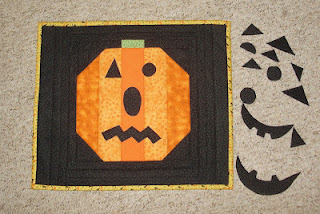 This is one of my favorite pictures! Mom passed away in 2012 but Sadie still remembers playing with these placemats with Mom and that warms my heart. 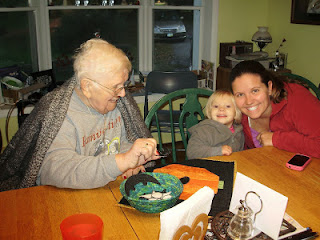 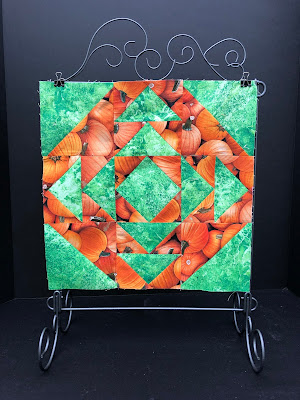 I love my pumpkin fabric! I think it looks like this picture... 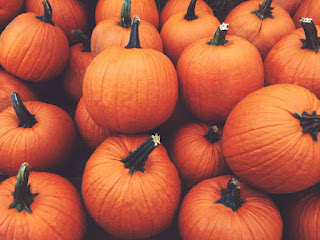 The above block was constructed according to the pattern, but I wanted to see what it would look like if I rotated the corners. 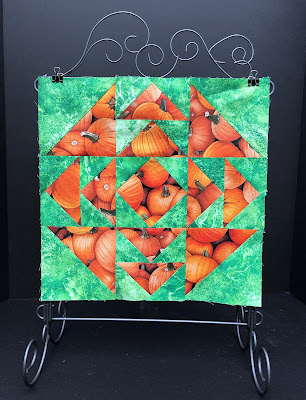 I played around with the corners before I stitched up the first block. Because I liked it both ways and I had the fabric, I decided to make a second block. For my end of the year project, I need more than twelve blocks, so I was happy to make a second one again this month.
I used the original block layout for my 6" block; and like some other months, I used the bright light mini mosaic fabric. I LOVE how it looks! (If I had taken my pictures correctly, you would have seen an individual picture of that block, but no.... since I didn't do that so you get a picture that includes the similar 12" block.  😒 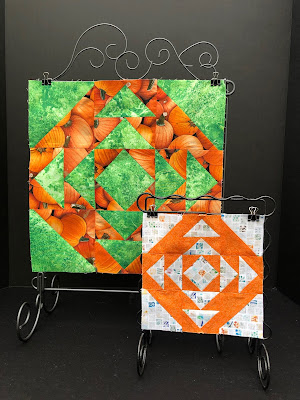 And because I DID get a picture with all the blocks, you get to see that.... 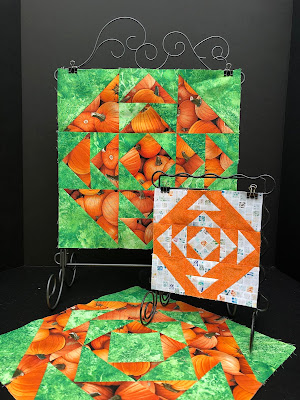 ******************************
It's recipe time!
Yes, I like roasted pumpkins and pumpkin seeds, but I decided to go with a dessert this month. This is delicious AND simple
Pumpkin Spice Cake
15 oz pumpkin puree (canned** or fresh)
1 box (18.25 oz) Spice Cake Mix
Pre-heat oven to 350 degrees.
Spray and flour a bundt cake pan (you can also use a 9" x 13" pan).
In a large bowl, mix Spice Cake Mix and Pumpkin Puree until well blended.
Pour batter into prepared bundt pan.
Bake 25 - 30 minutes, or until toothpick inserted in the center comes out clean.
Cool in bundt pan 5 minutes and then invert onto cooling rack.
(Leave in 9" x 13" pan to cool.)
Serve warm or cooled.
Drizzle with a white glaze, if desired.
(To make glaze, combine, 1 cup powdered sugar, 1 Tablespoon softened butter, 1/2 teaspoon vanilla, and 2 - 3 Tablespoons milk or heavy cream.) 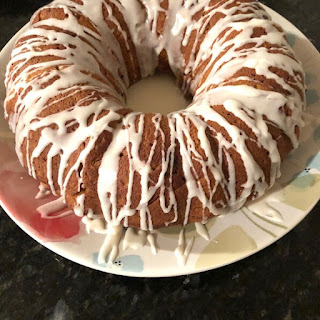 This cake is AWESOME the second day and is great in the morning with a cup of coffee.
Speaking of coffee, why not grab a cup and check out the rest of this month's bloggers.
Patterns by Jen
Pieceful Thoughts
Daybrook Designs
Quilty Creations by Fawn
Sunflower Stitcheries and Quilting
True Blue Quilts
Patti's Patchwork
Quilt 2 End ALZ
I'd love to see your blocks! Feel free to leave a comment and include a picture.
Posted by Joanne at 12:00 AM