I'm doing it! I'm posting twice in the same week. It's been quite a long time since that's happened, but hopefully I've broken the drought and you'll be hearing from me more frequently.

Here's what's on my wall right now. The Fast Forward pattern is by Jaybird Quilts and I love how it looks. My friend Kare is making one also, but like the pattern, she's using black as her contrasting fabric and her's is much more scrappy than mine. I really like Kare's quilt! It'll be fun to see them next to each other. 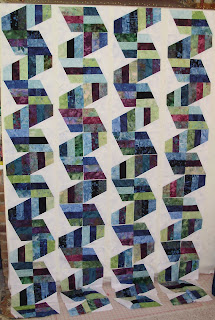 The column to the left is sewn together and I'm on working on the next one. Once all the columns are sewn, I'll add long, vertical sashing strips.

Now, I'm having a bit of trouble here because of a mistake I made early in the process. I decided to use some strips I had received in a swap for the ribbon pieces and supplement them with the leftover Blue Hawaii Bali Pop pieces that I had on hand here. Well, if you've ever participated in a swap, you know that 2 1/2" is not the same for everyone. Some of my strips were a bit bigger and some smaller. I didn't think about that small detail when I started sewing the strips together late on night; and I had already cut the contrasting fabric using the Lazy Angle Ruler, which in retrospect I shouldn't have done first. Anyway, not all of my strip sets equaled exactly 6 1/2" but because it was late and I was excited to see how this would turn out, I didn't pay any attention to the minor detail. Well, I should have because when I sewed the contrasting piece to the strip set piece, they didn't quite match up. Now remember, I said it was late when I was doing this and I was excited, so I just told myself that I would simply trim the finished block later - you know, when I was sewing the columns. Well, to make a long story short (I know, I'm too late to make it short), trimming them wouldn't really work because I would be cutting off the tip of the blocks. UGHHHH. I decided that I would fudge the pieces when sewing the columns; and let me tell you, that's certainly taking a lot longer than fixing the strip sets would have! Some of the tips are being cut off no matter what I do, but I've decided to live with it! 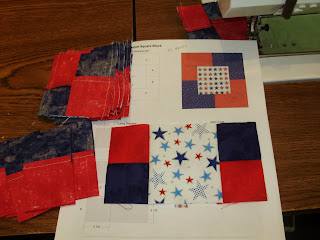 This will be a smaller version of David and Rachel's quilt; and of course it will be out of patriotic fabrics. I think it's appropriate that I might actually get to work on that today, don't you?

Check out what other quilters have on their design walls this Fourth of July!
Go to Judy L's Patchwork Times.
Posted by Joanne at 2:14 PM

Love the Fast Forward quilt -- what a nifty illusion!! Have a great week! :)

In spite of the troubles you are having, the fast forward quilt looks great.

Sometimes we make more work for ourselves in our excitement--sorry for your struggle but it sure looks great. It has good energy!

Love these spinning spirals! Believe me, you may see tips cut off but from here it looks wonderful!