Bras at the Mall

I spent most of the day at the Sandusky Mall manning the Bras for a Cause display. Here's a quick look at the display from a side angle. The public is being invited to donate $1 and vote for their favorite bra. The first place winner will be awarded $400, 2nd place will get $200, and the 3rd place winner will receive $100.  The bras will be displayed all weekend and then move to Kalahari for Girls' Night Out Nov. 2nd where the winners will be announced and the bras will be sold by silent auction. All money received will benefit four area cancer service centers. 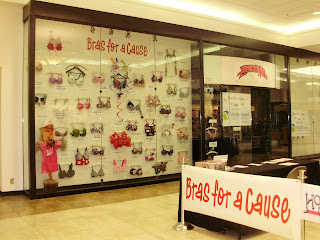 There are 43 bras on d﻿isplay here and I know of at least three more that will be "joining" the display at Girls' Night Out. Here are some pictures that show the bras a little bit better, but unfortunately they aren't good close-ups. I'm ging to try to get some close-ups tomorrow, but if I can't, I'll definitey have some after Wednesday's event. 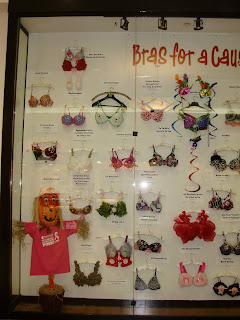 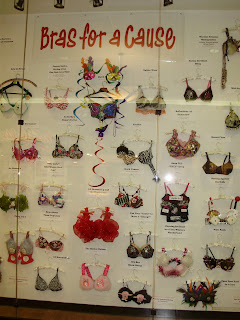 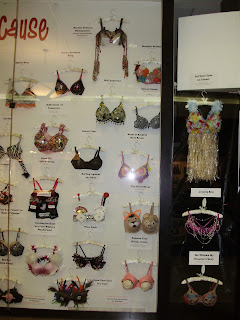 Some of these bras are so amazing that I just can't believe it. And, the names! Check out the bra in the top left corner of the first picture. The name of the bra is "Mrs. Darwin's Theory of Evolution." I'll tell you what, every woman that has seen that bra just laughs out loud about that. While we were setting up last night and before signs were up, a man stopped to check out what we were doing and he asked why that bra had legs. He was a bit embarassed when he realized what it was, but of course I've told that story to at least 100 people today.

I had a visitor today while I was manning the display. 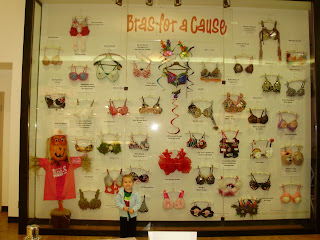 She found a bra that she really liked and it's taller than her! It's hard to see the bra, but it's the mask covering the eyes of the pumpkin. 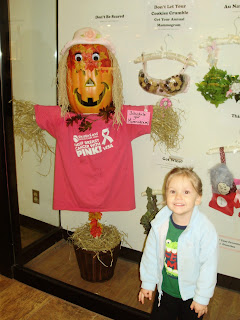 I'll be back tomorrow with more, but in the mean time, go to www.girlsnightoutcharity.com to see more pictures from last year's event.
Posted by Joanne at 11:39 PM

Thank you for sharing these with us. Just such fun and for a worthy cause.

These were such fun! Loved the Mardi Bra! Thanks for sharing pics! :)