It's a new year, which means it's time for a new Color Challenge. WooHoo!

I've had a lot of fun participating in the Color Challenges hosted by Jen of Patterns by Jen the past few years and I'm looking forward to doing it again this year.
So what is the Color Challenge and how can you participate?
Each month, Jen will pick a color and a block and she will provide instructions on how to make that block in both a 12" and 6" version.
Jen is quite clever with how she introduces the color each month. This year, she is using fruits and vegetables as the color inspiration. What fun!! 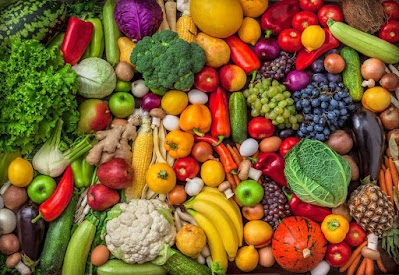 2021 Monthly Color Challenge Colors
January - Eggplant (Purple)
February - Lemon (Bright Yellow)
March - Yam (Red Orange)
April - Cherries (Red)
May - Potato (Brown)
June - Pumpkin (Orange)
July - Lime (Green)
August - Mushroom (Tan)
September - Pineapple (Soft Yellow)
October - Grapefruit (Pink)
November - Blueberries (Blue)
December - Green Olives (Olive Green)
Since we'll be talking about food all year, many of the bloggers (me included),
will be sharing recipes each month, featuring the fruit or vegetable of the month. Yummy!
Speaking of the bloggers, there is an awesome group who have agreed to share posts each month. There will typically be six or seven of us, and it is so much fun to see how each of us interpret the color by our fabric choices. Be sure to check out the list below and visit each of the bloggers. I promise that you won't be disappointed!
About a month ago, Jen shared lots more information about the Challenge and pictures of her fabrics. She has LOTS of information, so be sure to check out her post.
I forgot to take pictures of my fabrics before I cut into them, but I will tell you that my 12" blocks will all be made using fabric that has the fruit or vegetable in them.
My 6" blocks are going to be made using
Mosaic Masterpiece fabric from Cheryl Lynch. 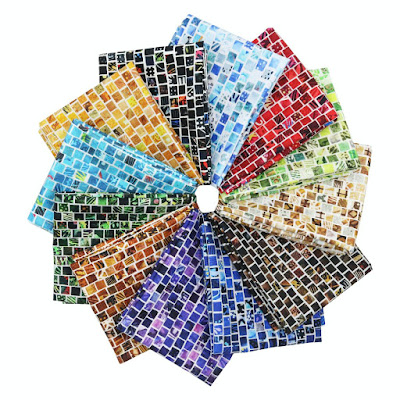 I had the pleasure of meeting Cheryl at a workshop in 2019 and then worked with her
via Zoom in November, 2020.
She is one talented lady and I'm thrilled to be using her fabrics! 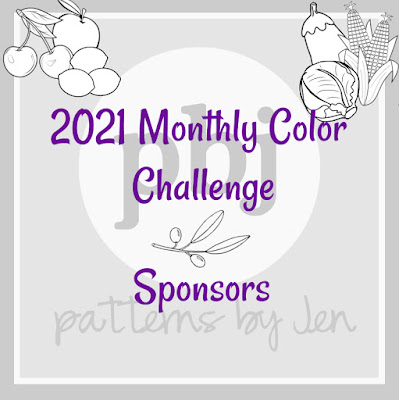 Like last year, there will be quarterly prizes.
Jen has a complete list of the sponsors HERE.
There are a lot of sponsors, which means a lot of prizes!
All you have to do to be entered into the drawing is to make your block and then post a picture of it to the link up that Jen will share at the end of each month.
Easy Peasy!
(One link up entry per quilter each month, please.)
Thank you to the First Quarter Sponsors!
Let's show them our appreciation and check out their products. 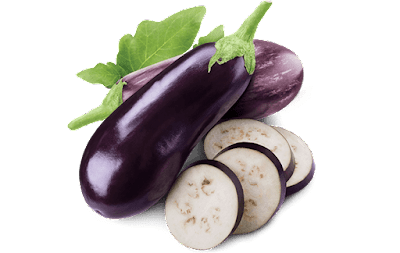 Is eggplant a fruit or a vegetable?
Botanically, eggplant is a berry, just like blueberries, watermelon, or tomatoes.
In botany, a berry is a fruit in which the entire ovary wall ripens into an edible,
relatively soft pericarp.
Culinarily, it’s a vegetable,
as it’s used in main dishes and not eaten for sweetness.
(My recipe can be found at the end of this post, where you will also find some hints about choosing eggplants, how to store them, etc.)

Some of the earliest written evidence for eating eggplant is from the Charaka and Sushruta Samhitas, Ayurvedic texts written about 100 BC that describe the health benefits of eggplant. 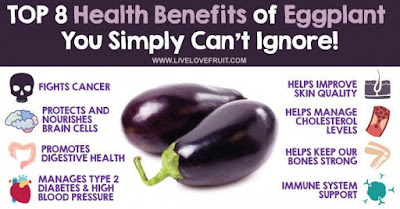 Here are some Fun Facts about Eggplant
In China, as part of her “bride price,” a woman must have at least
12 eggplant recipes prior to her wedding day.
In Turkey, “imam bayeldi,” a tasty treat of stuffed eggplant
simmered in olive oil is said to have made a religious leader swoon in ecstasy.

When first introduced in Italy, people believed that anyone who ate
the “mad apple” was sure to go insane.

Over 60% of eggplants are produced in China alone.
India, Egypt, Turkey, and Iran were also major producers.

While the fruit is often considered to be a bit odd looking,
the flower portion of the plant is quite beautiful. 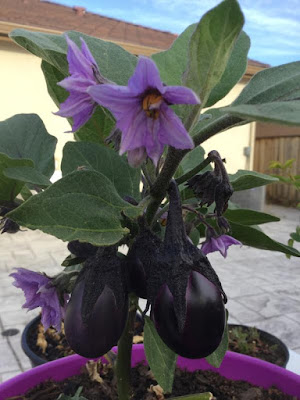 ********************************
Enough "talking!" Let's get to this month's blocks.
The steps to making this block are very simple and straightforward.
Go to Jen's Blog for cut sizes and piecing instructions.
I love it when designers include pressing information. Thanks Jen!! 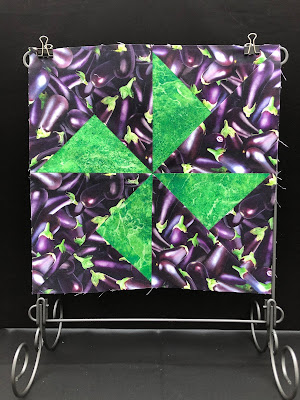 I love the eggplant fabric in this block. It's fun and colorful!
I decided to use my eggplant fabric for the background because I was afraid that it would be too chopped up it I used it for the pinwheel.
I was excited to find this green in my stash, It's a perfect match to the stems. 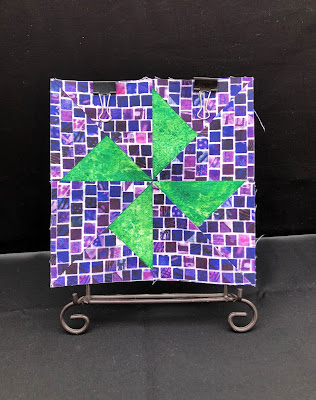 Isn't this 6" block adorable? I love the mosaic fabric as the background!
********************************
Check out the other bloggers who are making this block.
I just love how the change of fabric makes that blocks look totally different.
Patterns by Jen
Anja Quilts
Pieceful Thoughts
Faith and Fabric
Quilt 2 End ALZ
Kathy's Kwilts and More
DayBrook Designs
Sunflower Stitcheries & Quilting
True Blue Quilts
********************************
So who's hungry?
I was introduced to Stuffed Eggplant about twenty-five years ago by a friend who spent many years in the Middle East. While I liked his version, I wasn't overly thrilled with the lamb that he used. The following recipe is the result of many experiments trying to come up with what my family likes best.
It's not eggplant season, so I don't have a picture to share. 😞
Stuffed Eggplant
Serves 4
Ingredients
1 large eggplant
3 tablespoons extra virgin olive oil
1/2 teaspoon sea salt
1/4 - 1/2 teaspoon black pepper
1/2 pound ground sausage (ground beef or lamb can be substituted)
1 cup diced onion
1 cup diced red bell pepper
3 cloves garlic, finely chopped
1/2 cup chopped fresh parsley
1/2 cup chopped fresh basil
1 1/4 cups grated Romano cheese
1/2 cup bread crumbs (plain or Italian seasoned)
1 egg
2 small tomatoes, chopped
Steps
1. Heat oven to 350 degrees
2. Cut eggplant in half and scoop out center, leaving just enough meat inside the skin so that it holds it shape
3. Chop the scooped out eggplant into small pieces and place in a saucepan. Cover with water and boil until very soft  (10 - 15 minutes)
4. In medium saute pan, heat 1 tablespoon olive oil over medium heat. Add the ground sausage, salt and pepper, and saute until all the liquid is gone and the sausage is slightly browned. Chop the sausage so there are no large chunks. Set aside.
5. In another pan, heat the remaining 2 tablespoons of olive oil. Add the the onion, red pepper and garlic. Saute until onion is translucent
6. In a bowl, mix together the cooked eggplant, parsley, basil, 1 cup Romano cheese, 1/4 cup bread crumbs, and the egg.
7. Fill the scooped out eggplant halves with this mixture, divided evenly between the two halves
8. Top with chopped tomatoes, remaining 1/4 cup Romano cheese, and remaining 1/4 cup bread crumbs. Season with salt and pepper, if desired.
9. Place stuffed eggplant halves on an oiled baking dish and bake 50 minutes.
10. Let cool for 3 - 5 minutes. Slice widthwise and serve.
Eggplant Buying Tips
This recipe uses a "globe" eggplant, which is sometimes called "American" eggplant. It is purple, large, and pear-shaped. Other eggplant varieties can range from green to white and be striated (lined).
Choose an eggplant that is firm, evenly colored, and has unblemished skin. For this recipe, the eggplant should be fairly heavy, which means there will be plenty of meat.
The caps and stem should be in tact and not soft. (Softness can mean that the eggplant is old or beginning to mold.)
Refrigerate eggplant in a plastic bag for up to five days.
Eggplant can be bitter, so some recipes require you to salt the chopped pieces and let them sit in a colander for up to one hour to remove bitterness. Rinsing the pieces under cold water and then squeeze drying will remove any saltiness. Be sure that the pieces are dried before cooking or there may be too much moisture and the eggplant will get soggy. (Ask me how I know this.)
If you've never tasted eggplant, I hope you take this opportunity to give it a try.
Stop back February 1st for the next Color Challenge Block!
Posted by Joanne at 12:00 AM

Your blocks look great! I can't wait to see your blocks finished with Cheryl's fabrics, she is an amazing designer!

I love your blocks. They look great.

Your blocks are wonderful! Love the eggplant fabric, as well as Cheryl's fabrics with the green pinwheels! Great job! And, my, aren't you just a wealth of knowledge about eggplants! I love them. Your recipe sounds very good!

Nice blocks! Where does the cooked meat go in your recipe? It got set aside.

What a great, informative post! I learned some things - lol! It's nice to see someone else using prints too. I love that you are using prints with veggies and fruits.